(AUSTIN) — On Thursday the single remaining member of the board of the Texas Public Utility Commission was grilled by members of the Senate Jurisprudence Committee, including a rare appearance by the Lt. Governor, over billions in overcharges an independent watchdog said were assessed to power companies during the February winter storm. Arthur D'Andrea was the only commissioner left on the PUC after former chair DeAnn Walker and commissioner Shelley Botkin both resigned in the wake of the power crisis that left 4.5 million Texans without power, some for days. This week, both the Lt. Governor and 28 of the 31 members of the Texas Senate signed a letter asking D'Andrea to reverse these overcharges, which have left at least one public utility in bankruptcy. D'Andrea told the committee Thursday that he doesn't have the power to do that, nor did he believe setting the price as high as it could go was a mistake. That didn't sit well with lawmakers. 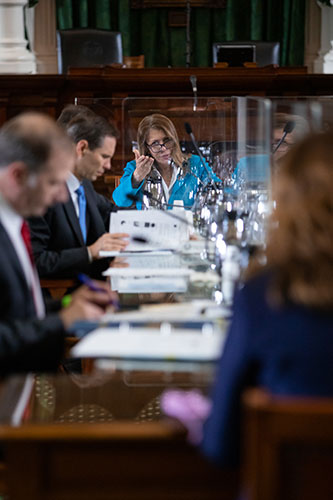 Houston Senator Joan Huffman and the Senate Jurisprudence Committee Thursday challenged the decisions made by the PUC and ERCOT during the electric crisis caused by the February winter storm.

At issue is a report from Potomac Economics, the independent market monitor charged with overseeing the Electric Reliability Council of Texas (ERCOT), which operates the Texas electric grid and the wholesale electric market. As the grid was collapsing on the night of February 15th when power generation couldn't keep up with demand, ERCOT issued an order to peg the prices of a megawatt of electricity to the maximum allowed by rule: $9,000. On a normal day, the price per megawatt is around $30, so this was orders of magnitude higher. Proponents of deregulated electricity say that setting the price that high does two things: it incentivizes power generators to come online, because there are high prices, and it induces big wholesale market customers, like factories, to reduce power use to avoid high bills. Carrie Bivins, representing Potomac, told the committee going to the maximum was the right decision, but that it should've been floated to allow the market to determine the price once the immediate emergency had passed and the grid had stabilized, sometime on February 17th. Instead, the price remained at its maximum cap for 32 more hours, resulting in $16 billion more in electric charges than would've happened had the market been able to determine the price as intended.

D'Andrea testified that he can't correct the overcharges because he lacks the legal authority. He said that the price remained at the cap for so long because ERCOT operators wanted to make sure that large industrial customers wouldn't come back online until they were confident the grid could handle the spike in demand. D'Andrea testified that he initially thought it was a mistake to keep the price that high, but that after talking with ERCOT CEO Bill Magness, who explained the situation to him, he realized it was the right call. Lt. Governor Dan Patrick, joining a committee to question a witness for only the second time since taking office, said that's not what D'Andrea told him in a phone conversation earlier in the week. "When we talked on the phone Tuesday, you didn't tell me anything about Bill's concern about industrials coming on," said Patrick. "You said in real time it was a mistake and it was the wrong decision to keep the prices artificially at $9,000 because the order expired the night before. You didn’t tell me anything about what Bill Magness said about anything else."

Patrick also raised concerns about what he saw as inconsistencies between D'Andrea's testimony before the Senate this afternoon after he testified before a House committee this morning. In the end, Patrick wondered if D'Andrea could be trusted to oversee the needed reforms to ERCOT. "We're going to make a decision, or the governor is going to make a decision, and we have to have someone we think is credible," said Patrick. "You say things in the morning, and you say things in the afternoon that are totally different, it's hard to accept you as a credible witness."

The Senate will reconvene Tuesday, March 16 at 3 p.m.