(AUSTIN) — The chair of the panel in charge of vaccine distribution in Texas told a Senate committee Wednesday that more than seven million Texans have received at least one dose of vaccine against COVID-19. Imelda Garcia leads the Expert Vaccine Allocation Panel (EVAP), a group of doctors, lawmakers, state health officials and other stakeholders that determines who is eligible for vaccination. Garcia, testifying before the Senate Health and Human Services Committee, said that the state has come a long way since the first vaccines arrived in Texas on December 14th thanks to the hard work of vaccine providers statewide. "They have been busting their butts to get shots in arms as fast as they physically possibly can," she said. 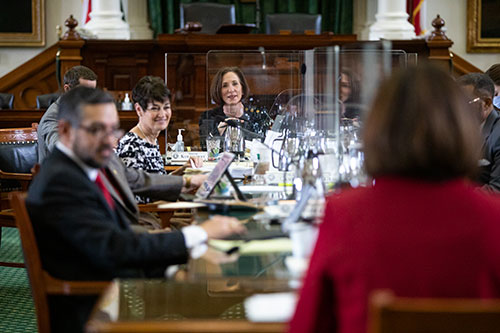 Health and Human Services committee chair Senator Lois Kolkhorst held a hearing Wednesday on her bill which would place into law the right for a resident of a long-term care facility to designate a person who can visit them regardless of pandemic restrictions.

Garcia described the state's vaccination effort, which depends on a delivery schedule set by Washington. "We can only push out the doses that the federal government allocates to us on a weekly basis, " she said. "That really drives everything." The allocation varies week to week. For example, this week, she said, the state had over a million first- or one-dose shots, and 1.7 million second doses. Next week, the state will get 600,000 doses.

Texas was one of the first states, said Garcia, to implement vaccination protocols based on age and other conditions, such as hypertension and lung disease. "That really came out of looking at the data," she said. "Over seventy percent of deaths are within that sixty-five plus age range, and when you look at hospitalizations, over eighty, ninety percent is really driven by those with co-morbidities." This group makes up the 1-b tier, currently eligible to receive vaccinations in Texas. Garcia went on to say that following new federal guidelines, teachers, school staff and child care workers will also be prioritized.

On Wednesday afternoon, the Department of State Health Services announced that those aged 50 and up will be eligible for vaccination beginning next Monday, March 15th.

The committee also approved legislation that would codify rules around who is permitted to visit those who live in nursing homes and other long-term care facilities when general visitation has been suspended due to infection threat. According to the state Health and Human Services Commission, only five out of the 1,222 nursing homes in Texas avoided an outbreak of COVID-19, with more than eight thousand deaths. That's with a March executive order that prohibited visits to those in long term care facilities. Residents were left cut off from friends and family, only able to communicate via telephone, with no physical contact. That added to the pain and stress many of these residents were experiencing as COVID raged through their facility. "I felt like we were saving the body, but killing the spirit," said New Braunfels Senator and emergency room physician Donna Campbell. In September, restrictions were eased and residents were allowed to designate a person as an "essential caregiver" who could visit them under strict mitigation protocols.

"Caregiver" doesn't limit choices to medical professionals, anyone could be designated, though the person would have to follow a facility's mitigation protocols, including testing negative for COVID and wearing PPE. The legislation approved by the committee on Wednesday, SB 25 by Brenham Senator and committee chair Lois Kolkhorst, would put this rule into state law. Kolkhorst said her office was overwhelmed with messages from constituents who couldn't see a loved one because of the visitation restriction. "After the initial shock of COVID, the number one…communication was from someone whose loved one was a resident of a nursing home or assisted living and they couldn't see them. It was really difficult," she said. "Again not saying anyone was at fault, we just didn't have anything in place to ensure those visitations." The bill now heads to the full Senate for a vote.

The Senate will reconvene Tuesday, March 16 at 3 p.m.