(AUSTIN) — The Senate State Affairs Committee heard bills related to both freedom of religion and freedom of speech as it held its first meeting of the session Monday. The committee often considers important issues with a national profile and hears legislation dealing with questions of constitutional rights. Senator Bob Hall, beginning his second session on the panel, said he greatly enjoyed his first term on the committee that regularly weighs some of the most pressing issues facing Texas. “Right after Finance, I think State Affairs is the ‘action’ committee,” he said during opening remarks. The bills considered Monday looked at government’s rights to restrict church attendance during the pandemic and what kinds of content social media companies can ban from their platforms. Both are part of Lt. Governor Dan Patrick’s 30-bill priority legislation package. 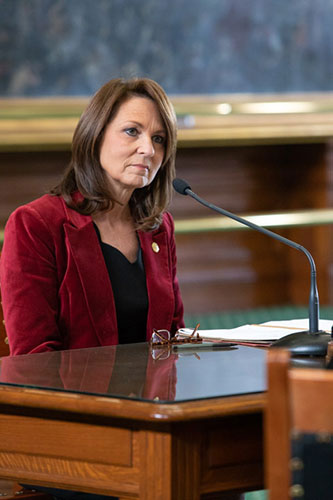 Senator Angela Paxton of McKinney offered legislation Monday that would prohibit government agencies or officials from restricting religious activities, even during state emergencies.

Committee chair and Mineola Senator Bryan Hughes laid out a bill he says is intended to protect political speech online. He believes that major social media companies, like Google, Facebook, and Twitter, violate free speech rights by sanctioning users who post certain political viewpoints - at times permanently banning users from the platform. “The concern is about free expression of ideas, and having a debate, having an exchange,” he said. “We want to make sure that viewpoints aren’t discriminated against, whether they be conservative, liberal or in-between.” His bill, SB 12, would permit users in Texas who believe they have been banned from a platform for posting political views to seek a court order for reinstatement. It also provides for a plaintiff to recover attorney fees should they prevail and gives judges the power to hold companies that refuse injunctions against bans in contempt of court.

Hughes argued that because just a handful of media companies have come to dominate the market, controlling almost the entire social media space, they constitute a de facto “town square” and that First Amendment protections on political speech should apply. Federal courts, including the US Supreme Court, have ruled that private companies are under no constitutional obligation to host content, but Hughes told members that the bill “threads the needle” on federal law regulating speech issues because it doesn’t assess a statutory penalty for content moderation. “It just enforces a prohibition on viewpoint-based speech censorship,” he said. Hughes added that federal law already allows states to regulate websites provided those regulations are consistent.

Also Monday, Senator Angela Paxton of McKinney and North Richland Hills Senator Kelly Hancock offered complimentary pieces of legislation aimed at restricting the government’s ability to put limits on religious assemblies. “It is certainly at the center of what it means to be an American and to be a Texan – regardless of any specific person’s faith – that we protect everyone’s freedom to assemble in places of worship, to engage in religious activities and to worship together,” she said.

A March 31, 2020 executive order from Governor Greg Abbott officially placed religious services under the umbrella of essential services during the pandemic. Those who spoke in favor of the bill said they worried about future orders like one issued in New York, where that state’s governor placed occupancy limits on churches in areas with the highest COVID infection rates. The US Supreme Court ultimately enjoined the order, but supporters of the bill testified on Monday it shouldn’t get that far. The legislation considered today would present a constitutional amendment for voter approval that would prohibit any governmental entity or official from placing limits on religious services in Texas.

The Senate will reconvene Tuesday, March 9 at 3 p.m.