(AUSTIN) — The state of Texas was mere minutes away from a complete electrical grid collapse, one that would've left the state without power for weeks - or longer - according to testimony offered before a Senate panel Thursday. The Senate Business and Commerce Committee opened the first day of hearings into the statewide blackouts caused by the winter storm that blew into the state on the night of February 14th. Nearly half of the state's electricity generation capacity was knocked offline as demand skyrocketed, and more had to be cut to maintain the integrity of the state's electric grid, according to the CEO of the Electric Reliability Council of Texas (ERCOT), the company that manages that grid. 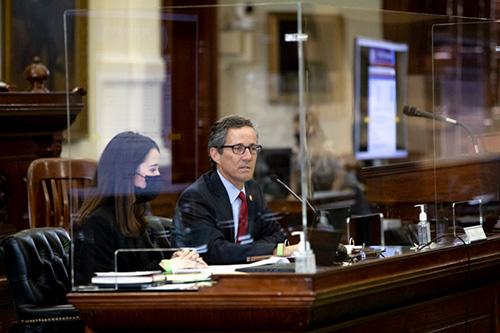 Senator Kelly Hancock of North Richland Hills chairs the Business and Commerce Committee, which is holding multiple hearings into what caused the statewide blackout the week of February 14th.

Providing power to an entire state is a delicate balance between supply and demand in order to keep the current at the required specific frequency of 60 Hertz (Hz). Even a slight decrease in that figure can begin to damage and destroy generation equipment, and ERCOT is required by rule to reduce supply capacity, or shed load, in order to maintain a safe frequency. According to a timeline presented by CEO Bill Magness, ERCOT entered the most extreme phase of emergency operations at 1:23 a.m. early in the morning of February 15th after 35,000 megawatts (MW) of power generation had gone offline - about a third of the state's total generation capacity. Just one MW is enough to power about 200 homes. As capacity continued to decrease, so did the grid frequency, and ERCOT ordered generators to reduce power output, or "shed load". Over the next 20 minutes, as more than 5000 MW more of generation capacity failed, ERCOT ordered 10,500 MW of load shed. During that time, the grid frequency had dipped below the critical danger threshold for four minutes and 23 seconds. At nine minutes below the threshold, Magness said, transmission and generation equipment will be physically damaged.

Had load not been shed and that critical frequency not met, said Magness, then the entire system could have collapsed, plunging nearly the entire state into a blackout. "As horrible as those conditions were last week, if we had sat there and not taken action to level up that frequency, that's when the bad things happen," he said. To come back, ERCOT would've had to restart the entire grid cold, an untested procedure referred to as a "black start". Magness told the committee that slowly bringing generators back on line, dealing with damaged infrastructure, all while maintaining that vital 60 Hz frequency would've taken a number of weeks or even months.

As lawmakers seek to identify the causes of the loss of power in the week following the February 14th storm, they are also trying to discover who should be held accountable. Magness faced more than five hours of intense questioning from senators. Some were frustrated by what they saw as a lack of directness when pressing for answers as to what went wrong and how to fix it. "This is the biggest train wreck in the history of deregulated electricity," said Conroe Senator Brandon Creighton. "It's very important to the public and those we serve to have your opinion, rather than very vague, broad concepts."

Also appearing before the committee was Public Utility Commission Chair DeAnn Walker, who addressed media reports about bills in the multiple thousands of dollars. There are seven million customers who get power through ERCOT, the vast majority of whom are on fixed rate plans, and shouldn't see an increase in their electric bills. Only about 40,000 customers use index providers who pass through these prices. Walker said the commission is looking into these cases. "We believe that we're going to need to figure out a way to try and help those customers," she said.

The Business and Commerce Committee will reconvene for a second hearing on this issue Friday, February 26 at 9 a.m.