(AUSTIN) — As millions of Texans were stranded in their homes without power and water, others had to brave the icy roads and single digit temperatures of the harshest winter storm ever to hit the state. In session Tuesday, the Senate officially recognized the vital contributions of police, firefighters, EMTs, utility line workers and grocery store employees that helped Texas get through a chaotic week. “Texas first responders were on the front lines,” said Conroe Senator Brandon Creighton. “They answered the call of duty and saved many lives fighting through the worst of conditions.” 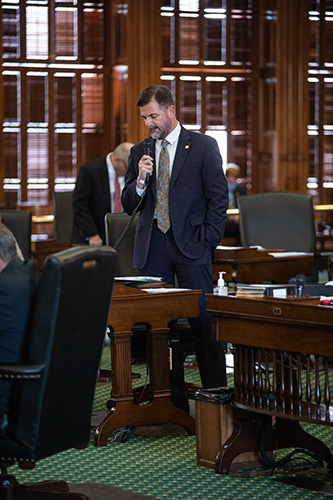 Senators shared personal stories of the storm and of the men and women who helped Texans get through a dark, cold week like none in memory. “On the west side of Houston we have Engine 57, it’s within earshot of my house,” said Senator Paul Bettencourt “The siren never stopped for a week, it was constant. They were on one mission after the next…that’s one group that can’t stay home. They have to go out.” Senator Donna Campbell of New Braunfels, an emergency room physician by trade, spent five straight nights working in the ER. She said the state relies on these first responders who have had to persevere through some of the most difficult times the state has ever faced. “They’ve been there for us through the hurricanes, through COVID, through this apocalyptic arctic weather…we can’t thank them enough,” she said. Lt. Governor Dan Patrick said that he spoke with a DPS state trooper in Lubbock where the wind chill pushed the temperature into the negative numbers. “I said, ‘how long were you off the road?’ and he said, “Well I wasn’t off the road,” said Patrick. “Our state troopers, our local police, our sheriffs, our constables, our firemen, our EMTs, all of these folks didn’t want to leave anyone out there, but all did their duty, putting their life on the line for people who were in harm’s way.”

Police, national guard, healthcare workers, and firefighters weren’t the only ones who had to risk life and limb to ensure that Texans could still get food and water and help get the lights – and heat – back on. Utility line workers had to work 24 hours a day in brutal conditions to try and maintain and restore the state’s ailing electrical grid. “These linemen and generation workers across Texas left their own families in the cold and dark to go out and work and repair damaged power lines and restore generation facilities to ensure our families, our hospitals, and our communities had electricity,” said Georgetown Senator Charles Schwertner. “We owe these brave individuals a great deal of respect and gratitude, and I have been disheartened to hear of stories of these linemen being harassed by frustrated customers.” Schwertner added that while people’s anger at the outage was justified, the workers on the ground weren’t at fault. North Richland Hills Senator Kelly Hancock wanted to highlight the precarious situation these workers found themselves in. “The very people that were trying to return power to homes and to areas across the state…they felt their lives were in danger because of the threats that were taking place here at this time.”

Senators also wanted to ensure the contributions of grocery store workers didn’t go unnoticed. Senator Dawn Buckingham of Lakeway thanked them for their round-the-clock work to keep vital supplies on the shelves while they themselves were without power at work and at home. “These Texans epitomize the definition of being ‘Texas Strong’ and I could not be filled with more pride today than to join my colleagues in honoring them for their brave work and courageous sacrifices,” she said. Lt. Governor Patrick echoed these sentiments. “I’ve always said that the grocery workers were the first and earliest heroes, with our healthcare workers, and COVID,” he said. “When everyone was unsure of where the virus was heading, they were there. The grocery stores never closed.”

The Senate will reconvene Tuesday, March 2nd at 3 p.m.