(AUSTIN) — Members of the Senate Finance Committee tried to get a better sense of where billions in federal COVID aid funds flowed throughout 2020 at their Wednesday hearing. Due to the size of the aid and the speed at which it came into the state, lawmakers were scrambling to keep track of what money could go where and to who, spending hours a day on phone calls to federal officials who didn’t have answers themselves. “This was such uncharted territory, things kept changing, we couldn’t get any answers,” said Finance Chair and Flower Mound Senator Jane Nelson. “It was insane.” 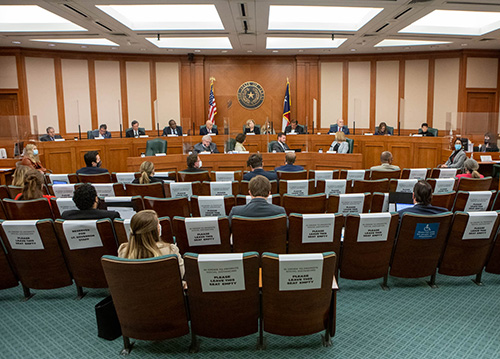 The Senate Finance Committee heard testimony on Wednesday about how federal COVID aid dollars were spent in 2020.

As part of the presentation on the budget for the Office of the Governor, agency budget Director Sarah Hicks told the committee about the challenges faced in disbursing billions in federal aid. “We were doing everything we could to make sure the funds flowing through us were actually going to the people that needed them, and not spending money to figure out how to spend money,” she said.

At the end of March, the federal government approved $150 billion in state aid through the CARES Act. Texas received 11.2 billion of that, but 3.2 billion went directly to 12 counties and 6 cities, with the remaining 8 billion going to the Office of the Governor for distribution. The money came with conditions: it had to be spent on COVID related costs, it couldn’t be applied to costs identified prior to the pandemic outbreak and it couldn’t be used for on-going state expenses.

Hicks said that the federal government told states that they could consider the salaries of any public safety or public health related employees to be valid COVID expenses, and that’s where most of the money went. $3.5 billion went to public health and safety salary expenses and $4 billion paid for staffing surges at hospitals, nursing homes and other critical need sites. Money also went to help local schools, public universities, courthouses and many, many other public needs, flowing through dozens of funds and agencies administered by the Governor’s office.

In all, the state spent $9.1 billion - more than the $8 billion received from Washington, but Hicks said a change in the FEMA reimbursement rate from 75 to 100 percent could make up much of the difference. Hicks cautioned that determining what spending actually qualifies for federal reimbursement under CARES is an issue-by-issue negotiation with FEMA. At best, she said, the state would see about $1.6 billion rebated.

Nelson said that the state got a crash course in dealing with disaster management when Hurricane Harvey ravaged the Gulf Coast in 2017, since a lot of the emergency response structure set up in the wake of that storm has served Texas well during the pandemic. “Having gone through the Harvey experience, unfortunately, was a great dress rehearsal for this,” she said. “We already had been through a little bit of this kind of thing before and we had systems in place to use.”

Despite the challenges, red tape, and confusion surrounding the accounting and distribution of CARES funds, Nelson said she believes state lawmakers and officials ultimately were able to get federal aid funds in place to help the Texans who needed it most. “We were able to do truly good things with this money,” she said. “I think Texas did a marvelous job.”

Congress is currently crafting another relief bill with a $1.9 trillion budget, much of which will likely go to state and local aid for pandemic response.

The Senate will reconvene Tuesday, February 16 at 3 p.m.