(AUSTIN) — Senators joined Lt. Governor Dan Patrick Tuesday in calling for changes in the way the state is distributing vaccines against COVID-19. Currently, those who are 65 years of age or older, or those with certain chronic conditions like asthma, hypertension or diabetes are eligible to receive the vaccine in Texas. This group, called tier 1b by state health officials, numbers in the millions, and there just aren’t enough vaccines coming into the state to meet the demand, said Lt. Governor Dan Patrick. 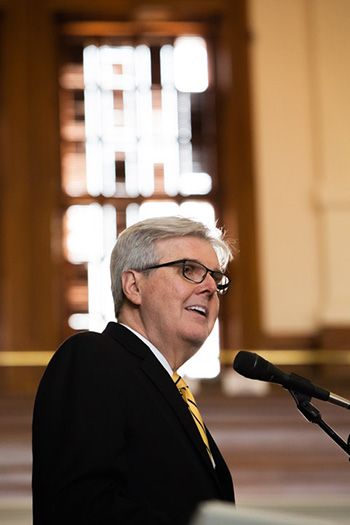 Patrick sent a letter last week to the Expert Vaccine Allocation Panel (EVAP), the 17-member commission overseeing distribution in Texas, asking for a more focused approach. His suggestions: focusing on those 75 and older and on teachers aged 65 or older, as the state tries to keep public schools open. San Antonio Senator José Menéndez was among those Tuesday to speak in support of finding a better approach for the state’s vaccination effort. He agreed that to keep public schools open during the pandemic, the state needs to protect teachers and other public school staff. “We’re asking teachers to make a choice every day,” he said. “Go to work, open our schools, and risk catching COVID, and we’re not even making them a priority.”

Addressing the Senate from the rostrum, Patrick laid out the numbers: the state is receiving about 1.2 million doses of vaccine per month, but there are 4 million Texans aged 65 and older and millions more younger Texans with chronic conditions placing them in tier 1b. “If we’re getting 1.2 million a month and we have, seven, eight or nine million in the group of 1a or 1b, it could be months before they could get that [vaccination],” he said. By narrowing focus to those most at risk of complication or exposure in tier 1b – especially the 1.5 million Texans over 75- the state could make a more significant impact on hospitalization and death rates in less time. “In six weeks or so, we could address pretty much everyone in that category who wants to be vaccinated,” said Patrick of those senior Texans outside of nursing homes who are still seeking vaccination.

Senators also noted the frustration and angst they hear from constituents as they try to navigate vaccine portals, refresh websites and hold on the phone for hours with no results, and no idea when they might finally be eligible to receive the vaccine. “The anxiety is the not-knowing-when,” said Menéndez. “We can find the technology to reach out to people to meet them where they are.” He suggested finding a way to let every Texan know when they can reasonably expect to receive a vaccine.

Right now, ninety percent of Texans who are getting vaccinated against COVID are doing so at one of 78 hubs situated across the state, according to Brenham Senator and EVAP member Lois Kolkhorst. Kolkhorst said as far as number of vaccinations given, the state is performing relatively well. Texas is among the last states, however, in terms of per capita supply received from Washington. Still, she is optimistic that the state can offer the vaccination to all teachers in tier 1b by spring and all to all teachers before the 2021-22 school year begins in August.

The federal government announced on Tuesday that it will increase orders from vaccine manufacturers from 400 million to 600 million, enough to vaccinate the entire country, and would be increasing monthly deliveries to states by 15 percent. A new COVID vaccine, a one-shot variant developed by Johnson & Johnson, is expected to publish phase 3 trial data sometime next week.

The Senate will reconvene Tuesday, February 9th at 3 p.m.