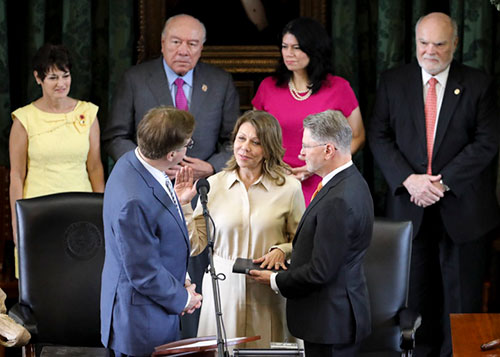 Houston Senator Joan Huffman was sworn in as the president pro tem ad interim for the 86th Legislature. She'll serve as the state's chief executive any time both the governor and lt. governor are out of the state.

(AUSTIN) — The 86th Legislative session concluded Monday, with lawmakers delivering on a promise made by state leadership back in January: sweeping school finance and property tax reform. "In my inaugural address I said that this will be the session we enact historical school finance reform by putting more money into the classroom, paying our teachers more, reducing recapture and cutting property taxes," said Governor Greg Abbott in a press release issued late Saturday. "Tonight, without a court order, the legislature did just that by passing one of the most transformative educational bills in recent Texas history."

The two bills saw final passage in both chambers Saturday evening. The first, HB 3, was shepherded through the process on the Senate side by Education Committee Chair and Friendswood Senator Larry Taylor. He said it represents groundbreaking reform for an education system that has lagged behind the changing needs of Texas schoolchildren. "What we are doing here today…will move us towards continued prosperity for this state," he said. In all, the bill would put $4.5 billion more into the classroom. This money would flow through funding formulas, and would direct more to students with economic disadvantages, those still learning English, and those with dyslexia. It would create an optional July term for eligible students and full-day, quality Pre-K programs for students from low-income backgrounds. The only outcomes-based funding in the final version would reward schools for every student they graduate ready for college, the workforce or the military. 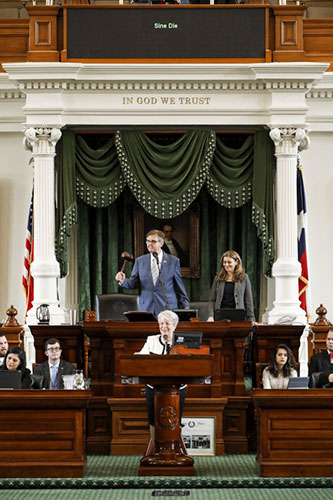 Teachers would see a salary increase, but it wouldn't be the even, across-the-board $5,000 originally included in the Senate version. Instead, it would create a mechanism by which teacher pay would increase whenever the legislature ups the basic allotment, the fundamental variable in school formula funding. HB 3 would raise that more than $1,000, to $6,160, of which nearly a third must go towards salaries for non-administrative public school employees. Districts would also have the option of developing a system to identify their best teachers and pay them more, but that system couldn't factor in results from state accountability tests. There are also incentives for teachers who are willing to teach at high-need or rural campuses. Administrators will have flexibility in how these funds get distributed, so the actual amount of increased pay will vary district to district. In all, the bill puts about $2 billion towards teacher and other public school salary increases.

The bill would also reduce local school property tax rates by an estimated 13 cents per $100 valuation by 2021, providing more than $5 billion in property tax relief within 2 years. It also seeks to rein in rate growth by requiring districts to seek voter approval if they wish to exceed a 2.5 percent rate increase in any year. SB 2, by Houston Senator Paul Bettencourt, would create a similar limit for most municipal tax rates, at 3.5 percent. That bill also includes a number of transparency and taxpayer education provisions. If voters approve no rate increases above these new limits, it would save an estimated $980 million in property taxes statewide by 2024. "This is astonishing tax relief," Bettencourt said of the two bills.

Following passage of both measures, Lt. Governor Patrick thanked the Speaker of the House, the Governor, and both chambers for working together to accomplish a landmark session. "This is truly an historic evening," he said. "It's going to save taxpayers a lot of money, give teachers more money and change the way we educate students and finance and make us number one in the country to lead on education reform."

The Legislature is scheduled to reconvene again in January of 2021, when lawmakers will see how well these education and property tax reforms worked over the 19-month interim. Until then, the Senate stands adjourned sine die.

Other key bills passed this session:
(Senate author/sponsor in parentheses)