(AUSTIN) — More Texans could be prescribed a cannabis derivative to treat certain disorders under a bill approved by the Senate Wednesday. Therapeutic use of cannabidiol (CBD) oil was first allowed in Texas under a bill passed two sessions ago, but could only for the treatment of a particular seizure disorder that resists standard treatments. In the four years since the law passed, it has proved its effectiveness, said sponsor and New Braunfels Senator Donna Campbell. "For patients participating in this program, they have had a remarkable and life-altering change because of this," she said. "That's compassion." The bill passed Wednesday, HB 3703, would expand the conditions eligible for treatment with CBD oil. 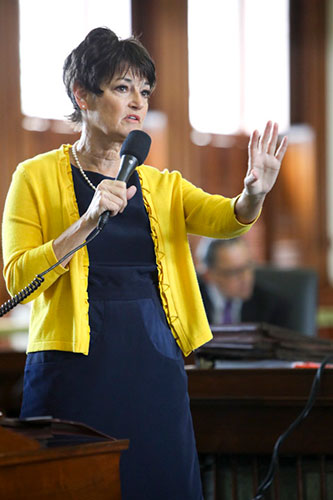 More patients would have access to CBD oil, a non-intoxicating derivative of cannabis, under a bill passed in the Senate by New Braunfels Senator and physician Donna Campbell Wednesday.

CBD oil cannot get a person high; it contains less than 0.05 percent of THC, the psychoactive intoxicant associated with recreational cannabis use. Still, it falls under the state's ban on cannabis and cannabis derivatives. That was a problem for families who had children with intractable epilepsy, a pernicious disorder that resists standard treatments and can cause hundreds of seizures in a week. CBD oil, however, shows almost miraculous results in treating the disease and far milder side effects than standard epilepsy medications. In 2015, the Senate passed a bill permitting the prescription of this treatment for just this disorder, and only under strict oversight. State law enforcement kept close track of who was prescribing and who was being prescribed the drug, and it required two separate neurologists to sign-off on the prescription and, then only after standard treatments had failed.

Campbell, a licensed physician by trade, said that there is growing evidence that CBD oil is an effective treatment for a number of other disorders, enough to carefully expand the scope of this treatment. "I wish there was a lot of measurable science, good, controlled, double-blind studies like is required for other medications, we don't have that," she said. "Narrowly crafting this gives us a walk with some assurance, not a race into something that may have a lot of unintended consequences." Her bill would ease the restrictions on who can prescribe CBD oil to a single board-certified specialist. It would allow doctors to prescribe CBD oil to treat multiple sclerosis, spasticity, incurable neurodegenerative disorders like Parkinson's and Lou Gehrig's Disease, autism, and as a palliative treatment for people with terminal cancer. State law enforcement would still keep a close eye on the program.

For Senator José Menéndez, whose wife has a neurodegenerative condition, this is a personal issue. He filed a bill this session that would allow the use of cannabis as a treatment for a number of debilitating disorders, but the measure never got a hearing. He praised Campbell for her work in expanding the use of CBD oil in Texas. "There are many, many people that have been asking me to present amendments, asking me to replace this bill with my bill," said Menéndez. "I'm not going to do that, not because I don't think we can do better, but because I think we must extend the compassionate use of cannabis products to more people. I want to thank you for joining us in our fight as a medical doctor." Menéndez said he hopes that one day, Texas will join 33 other states in allowing some form of medicinal cannabis beyond CBD oil.

As chair of the Veteran Affairs and Border Security Committee, Campbell has been a long-time advocate for veteran issues. Many who fought in the wars in Afghanistan and Iraq have advocated this session include in this bill disorders like post-traumatic stress disorder, traumatic brain injury and others common among those returning home from combat. Campbell said that she's heard their petitions, and hopes that one day CBD oil can be approved for treatment of those disorders. "We just don't have the data, good, scientific data, for PTSD that we can put in this bill at this time," she said. "I hope - I hope - that we can get definitive research necessary to be able to include PTSD, TBI and those other illnesses that are very difficult to measure." Passed unanimously by the Senate, the bill now heads to the governor's desk for his signature.