(AUSTIN) — Voters could enshrine a ban on a personal income tax in the state constitution under a measure approved by the Senate late Monday. Texas' lack of an income tax is one of the major drivers of the state's economic success, said bill sponsor and Prosper Senator Pat Fallon. "Every day more people move to Texas seeking an opportunity to make their lives better for themselves and their families," he said. "A big part of that is they know that a larger portion of what they earn will be kept in their pockets and not go to the government because Texas has a climate that is business-friendly, low-tax, high-prosperity and we have reasonable regulation." Many Texans, said Fallon, are under the mistaken impression that the state constitution explicitly prohibits a personal income tax, but it's more complicated than that. At issue is the "Bullock Amendment," named for the late Lt. Governor Bob Bullock, who pushed for the amendment in the early 90s. It requires that any personal income tax proposal be first approved by a majority of Texas voters. While that's not likely, as Fallon cited recent polling showing that more than 70 percent of Texans oppose an income tax, there is a way it could still become law. Any statute can pass the Legislature with a simple majority, meaning that 51 percent of lawmakers could hypothetically put the question of creating an income tax before voters. It takes a 2/3s majority of the Legislature to place a constitutional amendment on the ballot, however, so any future bills that seek to repeal this proposed income tax ban would require the support of a supermajority of lawmakers in both houses. 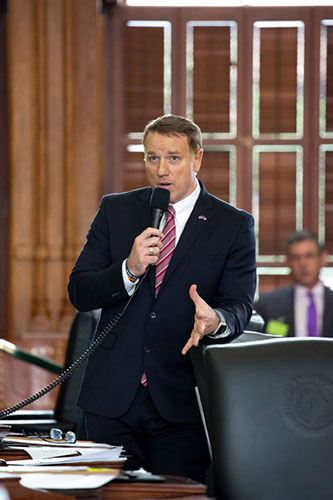 Prosper Senator Pat Fallon's proposal would allow voters to choose whether to put an explicit ban on a personal income tax in the state constitution.

One issue raised by those opposed to the legislation is the unintended impact it could have on the business franchise tax. The resolution would place this exact language in the constitution: "The legislature may not impose a tax on the net incomes of individuals, including an individual's share of partnership and unincorporated association income." A possible issue arises due to the use of the term "individual" in place of "natural person" as exists in the Bullock Amendment today. According to the fiscal impact statement by the Legislative Budget Board, the term could open the door to legal challenges of the franchise tax. "The term 'individuals' is not defined and could be interpreted to include entities that are currently subject to the state's franchise tax," it reads.

There are places in state law where the definition of "person" includes a corporation or other business interest. Subject to a lawsuit, if a court rules that "individual" means "person", and affirms that "person" applies to corporations, then it could theoretically strike down all or part of the levy. The Comptroller's biennial revenue estimate projects that tax will bring in more than $6 billion in revenue over the next two years, so a court ruling exempting some, or all, businesses from the franchise tax could introduce a significant deficit into the budget.

In response, Fallon emphasized that his proposal could only apply to personal income taxes. "The legislative intent of HJR 38 is that an individual is just like what it sounds: a single human being," he said. "There's no case law we can find where an individual is described by anything other than a single human being." More than that, he said, the amendment couldn't apply to the franchise tax. "The margins tax is not an income tax, the margins tax is a tax on gross margins," said Fallon. "So even if this didn't say 'individual' and said something else, it's still not the same thing."

Regardless of potential court rulings, other members worried that the amendment could be tying the hands of future legislatures. Brownsville Senator Eddie Lucio said that while he personally opposes an income tax, future lawmakers may see a need. "If they're going to vote to not have a state income tax in the future, they're shutting down an option for other legislatures," he said. "I'm not for shutting down options." Lucio said he preferred an interim study on the issue, so voters know the exact impact of what could effectively be an irreversible ban on a state income tax might be. Ultimately, the measure passed the Senate with the 2/3s approval necessary to be placed on the November ballot.