(AUSTIN) — A controversial citation program that can put drivers in a cycle of escalating fines would be eliminated under a bill approved unanimously by the Senate on Wednesday. The Drivers Responsibility Program (DRP) has been unpopular among lawmakers since its creation in 2003, but because it supports the state trauma fund, it's been difficult to do away with. "The Texas Legislature has contemplated replacing the DRP for more than 15 years, but we have been hesitant to change the program because it is tied to Fund 5111, which is dedicated to supporting Texas trauma care," said Houston Senator Joan Huffman. "This account assists in the treatment of approximately 130,000 individuals each year in medical facilities throughout Texas." She proposed a measure, HB 2048, which would repeal the DRP while implementing new revenue sources to maintain the hundreds of millions of dollars the program sent to the state trauma fund every biennium. 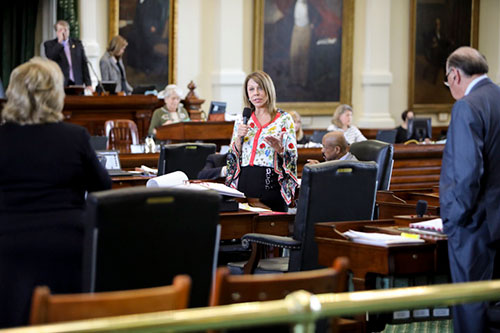 Under the DRP, when a person is cited for a traffic violation, they begin to accrue points on their license. Each violation adds a point, and points stay on a driver's record for three years. If they accumulate six points, they must pay the state a $100 annual surcharge, with each point above six adding another $25. It also includes much steeper fees for DWI convictions, as well as $250 for driving without a license or insurance. Failure to pay these surcharges can result in license suspension, trapping drivers in a system of endlessly compounding fees and fines. "Because this suspension exists, and driving with a suspended license is an eligible offense under the DRP, certain drivers find themselves in a never-ending cycle of charges," said Huffman.

In order to cover the $300 million in biennial revenue collected through the DRP today, the bill would turn to three new sources. It would increase the base state traffic fine by $20, up to $50, and increases the fee charged on every auto insurance policy issued in Texas from $2 to $4. It would also create new fines for those convicted of DWIs that are equal to current DRP surcharges. Those currently owing surcharges or those with a license suspended strictly due to DRP non-payment would have their licenses restored and surcharges forgiven. "Everyone will be moving forward with a new slate," said Huffman. The proposed revenue sources would actually put more money into the state trauma fund, with the Legislative Budget Board estimating a biennial gain of almost $7 million for 2020 and 2021.

When the Senate version of this bill was heard in the Finance Committee in April, chair and Flower Mound Senator Jane Nelson told Huffman that while she supported the repeal, any solution must adequately fund trauma care. "If we do anything to change this, that trauma funding is going to be replaced," she said then. The bill offered Wednesday won her approval. "It's what we should've done all those years ago," said Nelson. "I thank you for fixing this horrible driver responsibility program and putting in place a trauma funding system that will work statewide for all Texans."

Nelson was among a number of Senators who rose to thank Huffman for her work on this troublesome issue. McAllen Senator Juan "Chuy" Hinojosa said he opposed the original legislation creating the DRP during the 78th Session. "We've made criminals out of a lot of people that couldn't afford it and created a debtors' prison by issuing arrest warrants for thousands of people in our state," he said. "I do support trauma care funding. It's important, but at the same time I don't want it funded on the backs of poor people who can't afford to pay the fines…thank you for working on this bill." A handful of technical amendments were added to the bill, so it must go back to the House where Representatives can vote to concur in Senate amendments or request a conference committee to negotiate compromise language.