(AUSTIN) — The bill to change the way the state pays for public education while reducing local property taxes passed the Senate on Monday, moving the session's signature bill one step closer to the governor's desk. A top priority of state leadership throughout the year, the bill would reduce local school property tax rates by 10 cents while updating funding formulas to better address the modern student population in Texas, according to its author. "A system that started in the early 80s has had numerous Band-Aids attached to it," said Friendswood Senator Larry Taylor. "Here we are today with the system that we have: very complex, very outdated, and not meeting the demands we have before us." The current system is especially poor, said Taylor, at addressing the needs of economically disadvantaged students, which make up more than half of all public school students in Texas today. 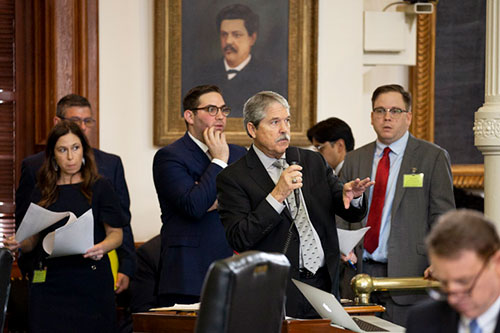 To improve achievement among that population, the bill targets funding increases toward students from low-income backgrounds in early education, including money for full-day, high-quality pre-K programs in order to improve the number of kids reading at grade level by the end of 3rd grade. This is a critical standard to meet, said Taylor, as all future education hinges on a student's ability to read. This funding would be partially outcome-based; schools would get more money up-front to improve reading standards for economically-disadvantaged students, but would also get a bonus for every student that met standards. Schools would have discretion to use an accredited reading assessment other than the STAAR test.

Districts would get additional money for every economically disadvantaged student they educate, and would get more depending on how dense poverty levels are in the community served by the district. Regardless of low income population, all districts would see more money though a $740 increase in the primary variable in the school finance formula, the basic allotment. There's more money for dual-language programs, dyslexia services and post-secondary readiness. For teachers, the bill still includes the $5,000 pay raise for all public school teachers and librarians, but also adds an effectiveness-based pay scale that would allow districts to pay their best teachers more and increase compensation to those who choose to work at more challenging campuses.

For property taxpayers, school rates would fall 10 cents and the bill would implement a 2.5 percent rollback rate on local school property taxes to slow growth. To pay for this, the bill initially contemplated a one-cent increase in the state sales tax, but an amendment to the bill developed by a Senate workgroup looking at alternatives would fund it through other sources. It would divert part of oil and gas severance tax revenue, about $2.3 billion for the biennium, from the rainy day fund into a new fund dedicated toward property tax compression, called the Tax Reduction and Excellence in Education (TREE) fund. Along with some changes in the way the state collects sales tax from online purchases and a reallocation from the Permanent School Fund, plus $2.7 billion already in the budget for property tax cuts, in total the bill would include about $5.6 billion in property tax relief.

If passed into law, it would mark the first time in decades that the state has made significant reforms to education finance without a court mandate. If the Legislature doesn't address school finance on its own initiative, Taylor warns the state could soon find itself in a familiar situation. "We've been given the opportunity to work on this by the court and now is our time or we will fall back into the same old pattern we've been doing for the last 3 decades: supreme court decision, Band-Aid, more money in a particular area, supreme court decision, Band-Aid, more money in certain areas," he said. "We've got to break that cycle, we've got to move our school finance system into the 21st century." The bill will now head into negotiations with the House to resolve differences between the two versions of the measure.

The Senate will reconvene Tuesday, May 7 at 11 a.m.