(AUSTIN) — The primary author of the Senate's version of school finance reform says he will present the bill to the full Senate this Friday after his committee voted to advance the measure to the floor. Education Committee chair and Friendswood Senator Larry Taylor acknowledged Wednesday that the process was moving much quicker than expected, but legislative deadlines call for swift action. Under the Texas constitution, bills that raise revenue must originate in the House of Representatives. House rules functionally set a deadline for consideration of bills originating in that chamber for next Tuesday, May 7th, giving lawmakers less than a week to come up with a way to pay for property tax relief envisioned in the bill. 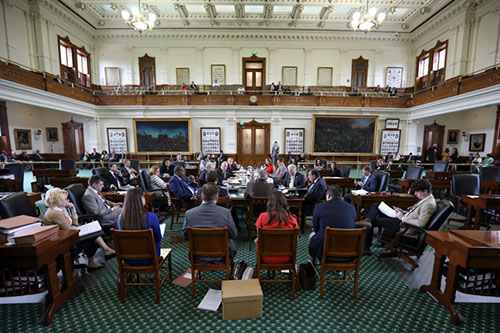 The Senate Education Committee approved the major public education finance reform bill Wednesday, sending it to the full Senate for debate this Friday.

The bill approved Wednesday doesn't change key provisions from the version unveiled at last week's committee meeting. It increases the basic allotment, the key variable for calculating formula funding, to $5,880, up almost $800, and would adjust formulas to direct more funds towards early childhood education, compensatory education for at-risk students, and post-secondary readiness. Teachers and school librarians would get a $5,000 across-the-board annual pay raise under the measure, and districts would be given the option of implementing an effectiveness-based pay scale that allows them to pay their best teachers more. The bill would reduce local school property taxes over the next two years, but it's not clear how the state will make up the revenue. As it was rolled out last week, the bill contemplated using a sales tax increase to offset the loss in revenue from property tax reductions, but that proposal proved controversial in the Senate. "We know what the number is to make this work the way we've talked about but I don't know what the revenue source is going to be," said Taylor. "We had the one cent [sales tax increase] that we've been talking about, but that wasn't popular, so we're looking at alternative sources."

A number of members expressed concerns about how quickly the bill was moving, but voted to go forward in the face of looming deadlines. "I know what we're doing and I know the gun we're under, but I think it's going to be important that on the floor, we have the opportunity to talk through some of these things," said Austin Senator Kirk Watson. "Otherwise I worry that the process becomes so rapid that people don't trust what's in the bill." Taylor assured the committee that despite the speed of the process, there would still be ample opportunities for members to contribute going forward. "This is not the end of the day, and frankly what we pass out of the floor on Friday is not the end of the day," he said. Taylor added that the conference committee process will give members much more time to consider changes to the bill. "We're putting forth our best effort, and doing what we think is best for the students of Texas and for our school systems, but the House is going to have some different opinions, we're going to have to work with that when it comes back," he said. Ultimately, the measure passed the committee with eight votes in favor and none against, with three members abstaining.

The House approved final passage of the session's signature property tax reform bill, SB 2, on Wednesday, but made enactment into law contingent on passage of the school finance reform bill. At the beginning of session, Governor Greg Abbott, Lt. Governor Dan Patrick and House Speaker Dennis Bonnen held a joint press conference to announce that they were united in purpose to pass meaningful property tax and school finance reform this session. "If the three of us are aligned, that we're going to accomplish a mission, and pass legislation, it happens," said Patrick at a January 9th press conference in front of the Governor's Mansion. Senators and Representatives have until May 27th, just over three weeks, to resolve the differences between their respective reform plans and send them to the Governor for his signature.

The Senate will reconvene Thursday, May 2 at 11 a.m.