(AUSTIN) — The Senate gave approval on Monday to a bill intended to increase security and prevent on-campus incidents of violence at public schools. In May 2018, eight students and two teachers were killed, and 13 more injured, when a student opened fire on classmates at Santa Fe High School. Following the first major school shooting in Texas in decades, Lt. Governor Dan Patrick and Governor Greg Abbott each appointed an interim committee to study this issue. The bill presented Monday takes ideas from these two studies to improve safety and security at Texas schools. It would rely on facility hardening, mental health services, threat assessment and a myriad of other tools to prevent future tragedies. "We've got to do something to make our kids feel safe on their campuses, and not just feel safe, but to be safe" said bill author and Friendswood Senator Larry Taylor, who also represents the city of Santa Fe. 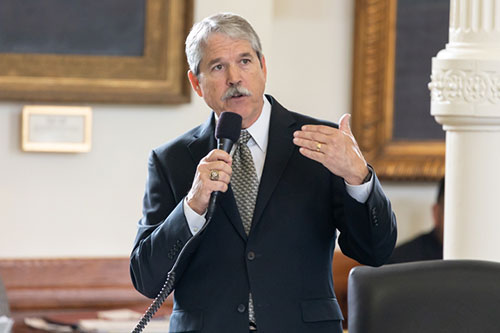 Senate Bill 11 would direct the Texas Education Agency to develop rules for hardening existing campuses and ensuring future facilities are built with safety and security in mind. It would require that each district develop a multi-hazard disaster response plan, one that addresses prevention, preparedness, and recovery. Districts would co-ordinate and file plans with the Texas School Safety Center, a school security think tank located in San Marcos. To oversee these plans, each district would create a dedicated school safety committee that would review and amend these plans at least once per semester. School officials would be required to coordinate with local law enforcement agencies to develop plans to increase police presence on campuses. Districts would also form risk assessment teams at each campus, to monitor school climate and student activity to head off any problems before they reach a crisis point. Taylor says school shootings and other violent tragedies rarely come out nowhere. "Generally the people who have done these acts…[other] people had some hint, some idea that they were going to do it before," he said. "This bill is designed to help us recognize those people early on before they get to that point." Teams would be trained at the School Safety Center not just to recognize potential violent threats, but also students who may be at risk for suicide or self-harm or substance abuse problems.

The bill includes a number of provisions relating to mental health, in order to identify students approaching crisis and intervene before the breaking point. "The best thing you can do in this situation is prevent," Taylor said. "Because once it starts happening, nothing good happens after that. So this bill is designed to try and reach out and grab these students before they get to this point." Regional school resource centers would be directed to partner with local mental health authorities to provide optional counseling and substance abuse assistance to the campuses they serve. It would require districts to train staff in trauma-informed care, a method to help people experiencing grief and trauma without exacerbating it, as well as guiding students affected by grief or trauma to available counseling services. Taylor said the trauma-informed model is helpful even in non-violent situations, like natural disasters. "It's just being able to recognize that kids have had different experiences," he said. "Recently we had Hurricane Harvey. We have a lot of kids now who react to strong thunderstorms differently than they would have before, and it's affected some of them." He says it's important that teachers, counsellors and administrators can recognize signs of trauma in order to find ways to help students cope positively.

Taylor said that dealing with the aftermath of this tragedy is one of the hardest things he's ever had to do as a lawmaker. "When you go to multiple young peoples' funerals, back-to-back, within a few short days it's very difficult and you don't want to do that again," he said. "That's why we have to get this done." The bill now heads to the House for consideration.

The Senate will reconvene Tuesday, April 30 at 11 a.m.