(AUSTIN) — The Senate Education committee gave the public its first look at that chamber's proposal for sweeping education finance reform on Thursday. The bill would include property tax relief, a teacher pay raise, and funding provisions aimed at making the system more equitable and effective. Committee chair and Friendswood Senator Larry Taylor says the plan focuses resources on those students that need the most help. "Our largest demographic now in Texas in our student population is kids who qualify for free and reduced lunch, right at 60 percent," said Taylor. "That's also our fastest growing demographic and unfortunately, historically, that's also been our least educated. So obviously that paradigm cannot continue on that path or we will not be the Texas in the very near future that we are today." 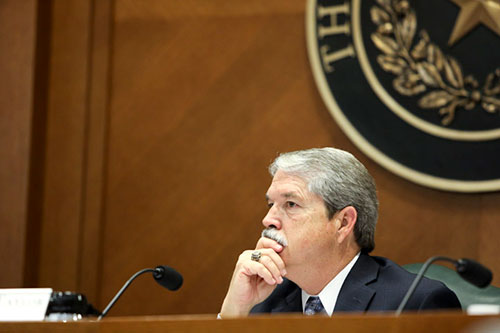 To provide more resources for those at-risk students, the bill increases funding for compensatory education to serve districts with high populations of low-income students. There's more money for early education through 3rd grade, including money for full-day pre-K for all districts, in order to meet critical 3rd grade reading standards. More funds would go towards improving post-secondary readiness, to increase the number of high school graduates ready for college, the workforce or the military. The bill increases the basic allotment, the fundamental variable in the formula calculations that determine how much funding districts are entitled to, from $5140 to $5880. "The basic allotment is the most equitable thing we can do in our system," said Taylor. "By increasing that, you're increasing equity, reducing recapture, and those types of things." The bill also includes additional funding for a number of other student populations, such as those with dyslexia and those still mastering English.

Another provision in the bill would reform how Texas measures student achievement. The bill would move from the current standardized STAAR tests to a series of shorter tests, administered on-line, over the next three to five years. This solves a lot of problems with the current system, said Taylor, allowing for shorter tests that don't take up an entire school day and flexibility to test students at the beginning and end of the school year, to better gauge individual student needs as the semester starts and how they progress through the term.

For teachers, the bill includes a $5000 annual pay raise for all public school teachers in the state, and provides funding for an optional performance-based pay scale. Taylor says a similar program in Dallas showed impressive results in improving outcomes at some of the districts most low-performing campuses. Under the bill, the best educators who work at the most challenging campuses could earn as much as $32000 more per year, if they teach in a participating district.

As far as property tax cuts, the bill increases the homestead exemption from $25,000 to $40,000 and compresses local property tax rates by eight cents in the first year, and 15 cents in year two. To pay for it, the bill contemplates a one percent increase in the state sales tax, though voters would first have to authorize it by approving an enabling amendment to the state constitution. Lawmakers are also considering a number of other revenue sources to offset revenue lost from a property tax reduction.

Dallas Senator Royce West told colleagues this bill represents the potential for significant and critically needed reforms to the Texas public education system. "If Texas is going to continue to try to be number one in providing education opportunities, we've got to make these transformative changes and make certain that they're stable for the next 10, 20, 30 years," he said. West asked stakeholders to bring solutions to issues they have with the bill, instead of just a list of disagreements. Taylor told members he doesn’t intend to hold a vote on the bill until next week at the earliest. "This is not going to be a rushed project," he said. "We’re going to have time to be thoughtful on this and take input from our members and others."