(AUSTIN) — Local taxing entities would have less room to raise property taxes before they have to ask voters for approval under a bill passed by the Senate on Monday. Under current law, school districts, cities, counties and other special taxing entities can raise taxes as much as eight percent in a year before voters can petition to hold a tax ratification or "rollback" election. This is too high, says Houston Senator Paul Bettencourt. He said average property tax bills have increased in the Dallas area by 55 percent over the last five years, 43 percent in Harris county over that same time, and it's like that across the state. Bettencourt says that too many people are being priced out of their homes by skyrocketing tax bills. "Taxpayers can't take it any more," he said. "It's a growth curve that's by any measure two or three times faster than their ability to pay." Bettencourt's bill, SB 2, would lower the rollback rate and implement a number of reforms to the process. 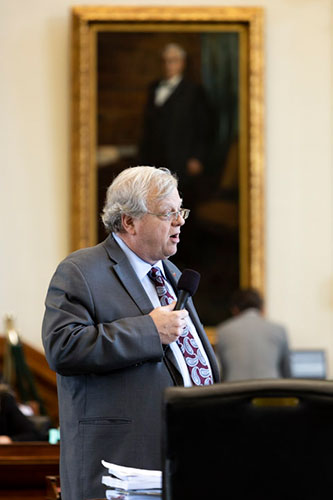 Houston Senator Paul Bettencourt's SB 2 would lower the rollback rate for property tax increases to 3.5% for most taxing jurisdictions and 2.5% for school districts.

Under SB2 the rollback rate would fall from 8 to 3.5 percent for counties, cities and most other taxing entities. For local school property taxes, which make up more than half of most tax bills, the rate would decrease to 2.5 percent. Property values from structures built in the last year wouldn't count against the cap, nor would annual cost growth related to indigent healthcare and legal defense. Rather than requiring voters to petition for enough signatures to trigger an tax ratification election, the question would be placed on the November ballot automatically if a taxing entity exceeds the rollback rates. These provisions would not immediately apply to taxing jurisdictions with less than $15 million in annual collections, but would require an election in May of 2020 asking voters in those jurisdictions if they want to opt in.

This rollback provision has been controversial, but the bill contains a number of widely agreed-upon provisions intended to increase transparency and taxpayer agency in the property tax process. The bill would create an online portal that would provide a wealth of tax information for property owners, who could search their address to see relevant statistics including property value, number and names of entities levying taxes, and rate growth. It would enhance public posting requirements for tax hearings and would establish a dedicated position within each county to ensure that local taxing jurisdictions comply with the online portal and posting requirements. Some statutory definitions would change to make them more clear to taxpayers and voters. What is now known as the effective tax rate, that rate at which the entity would earn the exact same amount of revenue as in the previous year, would be renamed to the "no-new-revenue" tax rate. It would also change the term "rollback rate" to "voter-approved rate"

The bill also includes a number of reforms to the appraisal appeal process, whereby homeowners can protest the value of their home before an appraisal review board. If a property owner believes that his or her property was overvalued, leading to a higher property tax bill, they can challenge the value. This process was frequently criticized during interim hearings on property tax reform, with members of the public testifying that the appraisal review boards are rife with conflicts of interest, hostile to taxpayer interests and unresponsive to property owner complaints. SB 2 contains a number of reforms to this process including directing the state comptroller to develop uniform standards for appraisal processes and would require that all appraisal districts abide by them. It would prohibit protest hearings from taking place at inconvenient times. Any decisions by a review board would be binding on a majority vote, rather than a unanimous vote as required by some districts. "With the attention on many, many appraisal reforms as well, I believe that this is a balanced package," said Bettencourt. "It looks at the needs of rural Texas, as well as urban. More importantly, it looks at the needs of taxpayers all across the state." The bill now heads to the House for consideration.

The Senate will reconvene Tuesday, April 16 at 11 a.m.