(AUSTIN) — Rural Texans have been increasingly left behind in the expansion in broadband coverage, but a bill passed by the Senate Thursday could change that. According to the Federal Communications Commission, at least 30 percent of rural Texans don't have access to high-speed internet. While the service is ubiquitous in urban and sub-urban areas, those living in rural areas could be missing out on the economic opportunities and access to services, such as telemedicine and virtual education programs, that broadband internet speeds make possible. Jacksonville Senator Robert Nichols, whose district spans largely rural areas in East Texas from Henderson to Orange Counties, offered a bill he says provides an innovative solution to this problem that won't cost the state any money nor impose additional regulations. It would allow rural electric co-operative companies to use existing easements to install broadband infrastructure. 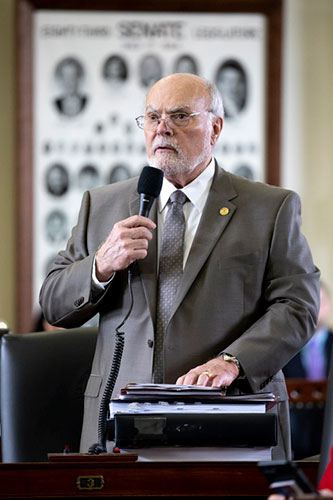 Nichols said these member-owned, non-profit co-ops already have 300,000 miles of distribution line in place for electric transmission, but many don't have the statutory authority to lay broadband transmission capacity in existing easements. His SB 14 would give them that ability. Nichols believes this will be a boon to rural economies. "A recent study by the U.S. Chamber of Commerce found that Texas could add as many as 23,000 rural jobs over the next three years and bring almost $4 billion of increased value if it bridges the digital gap," he said. Nichols said the bill includes protections for property owners, including a right to refuse a co-op to lay new wire on easements on their property. Co-ops would have to provide property owners with notice of their intention to install new infrastructure, and the owners have 60 days to opt out. It would also require the companies to keep a separate set of books for broadband expenditures and revenues, and would prohibit them from including the price of operating broadband services in electric utility rates.

Another of his priority bills, Lt. Governor Dan Patrick released a statement praising passage. "Senate Bill 14 will make sure that all Texans have access to the internet," it read. "It's key to providing our students with a better education and creating jobs by ensuring a better connection with the rest of Texas, the country and the world."

Also Thursday, the Senate approved a bill that looks to protect children from abuse, neglect or exploitation at state-licensed child care facilities or homes. Citing media reports, Houston Senator Joan Huffman said that eight children died last year at a childcare facility, and in a two year span between 2016 and 2018, five thousand more children were injured. In the last 10 years, facilities have been cited more than 3200 times for violations. "Since these child care facilities are licensed and regulated by the state, we must provide Health and Human Services more tools and resources to address these appalling acts against our most vulnerable population: our children," said Huffman.

Her bill, SB 568, would increase administrative penalties for child care facilities that are cited for abuse, neglect or exploitation of their young charges. Each incident would result in a $1000 fine. It would require the state health commission to develop safe sleeping standards for children in daycare that facilities must abide by. "Many tragic incidents occur when an infant is not sleeping in an appropriate position or environment," said Huffman. Injuries or sickness that require hospitalization must be reported to the parent or guardian, or the facility could face a $500 fine. Facilities would also have to maintain liability insurance if affordable and available. Huffman said she knows that the price of child care is unaffordable for many families, so she tried to craft a bill that wouldn't increase that burden. "I do not believe that any provision of this bill will raise the operating cost of any child care facility or home," she said. The bill now heads to the House for consideration.

The Senate will reconvene Monday, April 8 at 2 p.m.