(AUSTIN) — The Senate Finance Committee gave unanimous approval Wednesday to a proposal to fund state services for the next two years. The bill, which would spend $116.8 billion in non-discretionary state funds through 2021, includes $9 billion for property tax reform and public education funding reform, the two key priorities for the Legislature this session, said committee chair and Flower Mound Senator Jane Nelson. That money is split into three parts: $4 billion to pay for a $5,000 raise for all public school teachers and librarians, $2.3 billion in additional school funding and $2.7 billion for property tax relief. "This is a robust, financially responsible budget that meets the need of our growing state," said Nelson. "It makes smart investments in our future and it does these things within our constitutional spending limits." Other budget highlights include $2.4 billion to cover student population growth at public schools, more than $1 billion to upgrade information technology and cybersecurity across state agencies and $193 million to reduce wait times at drivers license offices. 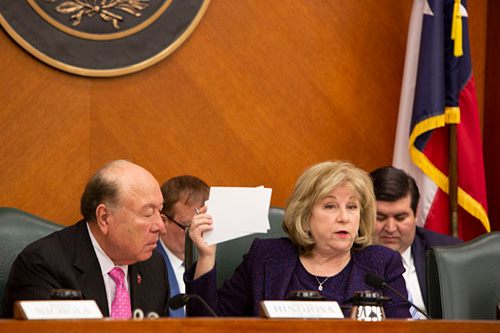 Committee chair and Flower Mound Senator Jane Nelson and the 14 members of the Senate Finance Committee voted unanimously to send the budget bill to the floor. Nelson expects to take up the bill next Tuesday.

Nelson told members she intends to take up the budget in session next Tuesday. Once it clears the Senate, five members from each chamber, including Nelson and the chair of the House Appropriations Committee, Representative John Zerwas of Richmond, will come together to work out the differences between the two plans. One potential area of disagreement has already been resolved, said Nelson, as both chambers agree on the funding amount intended for property tax and education reform. "We continue to negotiate this issue with the House, but both chambers have now reached $9 billion set aside for whatever agreement we reach," she said. The House considered its bill for education finance reform, HB 3, in session Wednesday.

Nelson also presented a bill to her committee Wednesday that would give the comptroller greater freedom to invest funds in the state's Economic Stabilization Fund (ESF). Senate Bill 69 would change the way the state determines the "sufficient balance" of the rainy day fund, a threshold amount above which the state comptroller is allowed to invest ESF money in market securities. This session, that figure is $7.5 billion. "While there are differing ideas about how to leverage the ESF, I think everyone agrees that we should not have seven-point-five billion dollars lying around the treasury earning a mere two-point-six percent interest," said Nelson. Currently, sufficient balance is determined by a panel of lawmakers, but Nelson's proposal would abolish that panel and peg the number to seven percent of biennial revenue. The sufficient balance would no longer determine the comptroller's investment authority, instead he or she would be permitted to invest up to three-fourths of the total balance. The Legislative Budget Board fiscal note for the bill estimates that this change would bring in $3.3 billion in additional state revenue through 2021.

The Senate Criminal Justice Committee heard a bill Wednesday that would increase the age for which the murder of a minor escalates to a capital offense. The bill was prompted by the death of Lauren Landavazo, who was shot and killed in 2016 at the age of 13. Her killer was charged with murder and sentenced to life in prison. Under current Texas law, individuals convicted of non-capital homicide are eligible for parole after half their sentence or 30 years, whichever is less, meaning he could be released from prison in as few as 28 years. Prosper Senator Pat Fallon believes that is too light a punishment for the murder of a child. "We need to ensure that somebody like this never harms another child again, with one hundred percent certainty," he said. "This law's not going to affect this monster, but it'll affect the others." His bill, SB 719, would permit prosecutors to charge suspects with capital murder if their alleged victim was aged 15 or younger, rather than 10 years old under current law. Convictions for this offense carry the death penalty or a sentence of life without the possibility of parole. The measure is to be named "Lauren's Law" in honor of the Landavazo family.

The Senate will reconvene Thursday, April 4 at 11 a.m.