(AUSTIN) — Following weeks of workgroup meetings, the Senate Finance Committee approved recommendations for funding the state budget for the 2020-2021 biennium Thursday. Since mid-February, committee members have worked to determine which agency funding requests to adopt and which to set aside or defer to a list of contingency spending. The recommendations adopted for Article III include $9 billion in additional spending for property tax relief and adds money to public school funding, both identified as this session's top priorities by state leadership. Committee chair and Flower Mound Senator Jane Nelson told members that she plans to hold a vote to send the budget to the full Senate next Wednesday, once all these recommendations are collated into a single document. 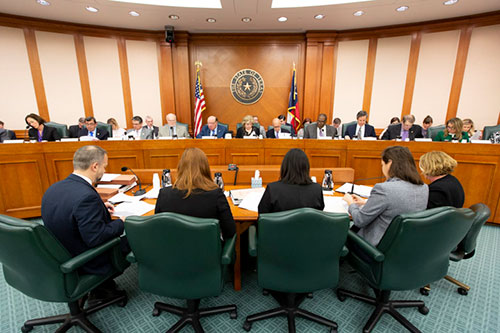 The additional money toward property tax relief and public education is divided into almost $4 billion for an across-the-board teacher pay raise of $5,000, $2.3 billion in additional money for non-salary public education reform and $2.7 billion for property tax relief. Article III workgroup and Education Committee chair Senator Larry Taylor of Friendswood said he thinks that the plan represents significant progress towards the goals laid out at the beginning of session. "At the end of the day I know we are going to take very large steps to improve our education outcomes for our students while providing meaningful tax savings for our businesses and our homeowners, and we're also going to improve the pay of our teachers," he said. The money in the budget is on top of the more than $900 million in rainy day funding approved by the Senate earlier this month to cover revenue school districts lost due to property value and student population decreases resulting from 2017's Hurricane Harvey. That supplemental budget, passed on March 13, also includes $100 million for school safety measures.

The non-salary portion of the education spending increase approved Thursday may be determined through the Senate's education reform bill, SB 4, submitted at the bill filing deadline on March 8. That bill included the framework to create new weights and allotments to guide more funding toward students with special needs such as those still mastering English and those with dyslexia, and concentrates the spending toward student populations from lower socio-economic backgrounds. It does not include, however, the actual numbers for the weights and allotments. The House version of the bill, HB 3, could also serve as the vehicle for the Senate plan once it clears that chamber. It's all part of the process, said Nelson Thursday. "I know people are impatient to know our final product," she said "I would point out to the public that this is a work in progress but right now, what [LBB staff] is getting ready to present to us contains that package that [Taylor] just laid out….9 billion dollars. Not chump change." Also still under consideration is the Senate's proposal to cut property taxes. The House version of the education reform bill would use state funds to compress local property tax rates by at least four cents per $100 valuation.

Once passed by the Finance committee, the budget will head to the Senate floor for consideration by the full body. If it is approved, it will then start the next phase of the budget process in conference committee. Nelson and four other Senators appointed by the Lt. Governor will work with House Appropriations Chair Representative John Zerwas of Richmond and four House members appointed by the Speaker. This committee will decide, line by line, which chamber's plan the final budget proposal should use to fund government services. Once an agreement is reached, the conference committee will submit a report to each chamber for an up-or-down vote. If approved by both chambers, that report will set state spending levels for the next two years.

The Senate will reconvene Monday, April 1 at 2 p.m.