(AUSTIN) — The Senate Higher Education Committee opened a discussion on Wednesday that members hope will serve as a starting point for a lasting solution to the issue of college credit transferability. With the cost of education at four-year universities continuing to rise, more students are electing to begin their post-secondary education careers at local community colleges. Nearly three-fourths of all four-year university students have some credits from community colleges, and a full third have more than 30 hours of credit. Only 43 percent of community college transfer students, however, achieve a degree within four years. One reason for this are issues regarding credit transfers. Often students have to retake courses they already took in community college, adding unnecessary expense to their college loans and contributing to increasing student debt levels. They might also find that courses they took that they thought would apply to their final degree program aren't accepted at their destination university. Measures considered before the committee on Wednesday would seek to streamline this process and demystify the process for students, advisors and parents. 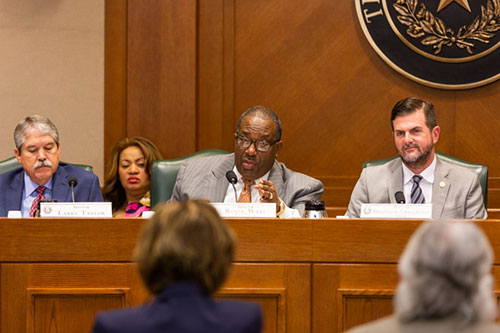 Dallas Senator Royce West wants to reform the system by which course credit hours transfer between institutions of higher education.

The transfer system in Texas is meant to create a core curriculum of commonly-required courses at universities that can easily transfer from one school to another. "The general intent of state policy is that a student at any institution in Texas can take 42 semester credit hours that can apply to all degrees at all institutions," said Dallas Senator Royce West, who has made credit transferability one of his signature issues. In reality, he says, only 12 semester credit hours commonly transfer between all institutions of higher education. The process is also daunting. Between the 50 community college districts, six university systems, independent universities and dual-credit programs, deciding which courses to take to earn a degree at a particular university can be confusing.

West had two bills before the committee that he hopes will lay the foundation for a solution to this problem. One provision would reform the state's college core curriculum. Half of the required semester credit hours would be in general studies, the others would be specific to a certain area of study. Because students frequently change majors, the Texas Higher Education Coordinating Board would develop "meta-majors", broad areas of study that lead to degrees with similar prerequisites. This could include areas like business, engineering and physical sciences and behavioral and social sciences. The business meta-major, for example, could include degrees in finance, economics, management and accounting, all of which have similar introductory-level courses. So if a student chooses a engineering meta-major, and starts toward a degree in electrical engineering but later decides to switch to civil engineering, they've already taken the introductory math and science courses common to both degrees.

The bills would also clarify transfer pathways, so students taking dual-credit classes in high school or attending community colleges would know, and their academic advisors would be better able to guide them toward exactly what courses they need to take to achieve a degree in a particular subject when they transfer. Universities would be required to develop comprehensive degree paths for each major they offer and submit those to THECB, which would then publish those on a website dedicated to the plans. "The student-centered system we envision would provide students and advisors with clear and transparent information about expectations and requirements for every major offered at every public college and university in the state of Texas," said West.

West said he wants to continue to work with major stakeholders on this issue at community colleges, universities and state agencies. He hopes to combine the two measures into one, final bill that will address this problem and add clarity and efficiency to what can be an opaque and confusing process.

The Senate will reconvene Monday, April 1 at 2 p.m.