(AUSTIN) — The state's teacher pension plan would meet statutory requirements for fiscal soundness under a bill approved by the Senate without objection Monday. The Teacher Retirement System provides monthly annuity payments for more than 420,000 retired Texas teachers and other public school employees, but doesn't meet the legal standard of "actuarial soundness", that is, the ability to meet all of its outstanding obligations within 31 years. That period currently stands at 87 years representing almost $47 billion in unfunded liabilities. SB 12 author and Houston Senator Joan Huffman warned that if the Legislature takes no action, the program's unfunded obligations would reach $124 billion by 2050. "This is long-term planning showing fiscal responsibility," she said. "This plan is far more cost efficient than simply attempting to contribute one-time infusions of cash every so often." Under the plan approved by the Senate, the fund would be actuarially sound by the next fiscal year. 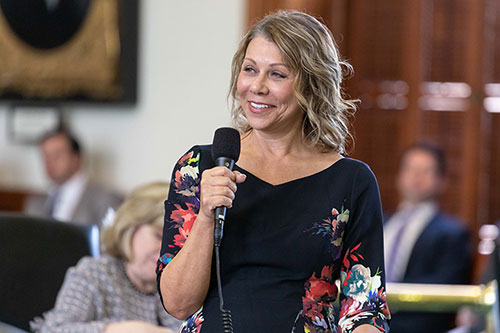 The bill would achieve soundness by gradually increasing rates from the three major contributors: the state, local school districts and active public school employees. Districts would see their contribution rate rise from 1.5 percent today to 2 percent by fiscal year 2025. Both the member and state contribution rates would go up to 8.25 percent by fiscal 2024, up from 7.7 percent for employees and 6.8 percent for the state. Also in the bill are provisions for a bonus check, up to $500, to be paid to beneficiaries during the next biennium. It's the first such "13th check" that retired teachers have received since 2013.

The money covering the state portion of the bill, more than $500 million from the Economic Stabilization Fund, was approved by the Senate as part the supplemental budget bill on March 13th. That measure's author and the chamber's lead budget writer Senate Finance Committee Chair Senator Jane Nelson of Flower Mound, said that Huffman's proposal demonstrates the state's intention to protect the future income of the state's retired educators. "What we put in last session was just to keep [TRS] afloat," she said in reference to a one-time infusion to the fund in the 2017 session. "This is a more permanent fix and a commitment on the part of this Legislature that we care about our retired teachers."

The bill now heads to the House for consideration. That body's version of the bill, as filed, would raise only the state's contribution rate, up to 8.8 percent.

In committee Monday, the Senate State Affairs Committee considered a bill intended to pre-empt what its author called a "growing attack on freedom of speech and expression of religious beliefs." Lubbock Senator Charles Perry worries when licensing boards adopt standards or rules that violate religious expression, it could cause people who work under an occupational license to choose between their job and religion. His bill, SB 17, would prevent licensing boards from adopting rules that unreasonably restrict a person's free exercise of religion. It also creates a new defense for people facing disciplinary action from regulators. "If a person comes in front of the occupational licensing board based on their speech or conduct, this bill provides a defense to losing their license as long as their conduct or speech is based on sincerely held religious beliefs," said Perry. The bill would not protect a person from being fired, sued or losing their license for violations of the law or standards of care. It would also not apply in situations involving the administration of life-saving medical care or law enforcement.

The Senate will reconvene Tuesday, March 26 at 11 a.m.