BILL COULD END USE OF RED LIGHT CAMERAS IN TEXAS

(AUSTIN) — Cities could no longer use cameras to enforce red light traffic laws under a bill proposed before the Senate Transportation Committee on Wednesday. Officially known as photographic traffic signal enforcement systems, these cameras automatically take a picture of cars entering an intersection after the light has changed and the vehicle owner is sent a ticket. This contradicts the standard of presumption of innocence that lies at the foundation of our legal system, said Edgewood Senator Bob Hall. "This owner, who may not have even been in the vehicle, is presumed to be the person who committed the violation," he said. "The innocent owner has then the burden of proof and often great expense of proving that they did not commit the alleged violation. This turns our judicial system completely and utterly upside down by requiring the accused to prove their innocence." Hall's bill, SB 653, would prohibit municipalities and other local jurisdictions from using red light cameras. 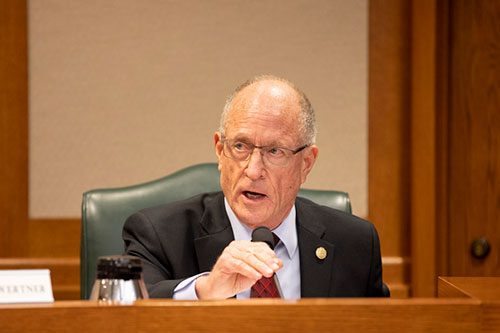 Senator Bob Hall of Edgewood wants to ban the use of automatic cameras to enforce red light violations, believing they violate constitutional rights.

In addition to the violation of judicial rights, Hall doesn't find arguments in favor of red light camera based on increased public safety compelling. The 2007 state law that allowed cities to issue citations up to $75 based on red light camera evidence also required that cities conduct traffic engineering studies at intersections before those cameras are installed. Hall said that most cities didn't comply with this provision. "Inasmuch as many of these systems were installed illegally without the required traffic engineering studies to determine their need, there is no reliable way to determine if these cameras actually improve safety," he said.

Committee Chair and Jacksonville Senator Robert Nichols added later that the Senate has passed a bill ending red light camera programs three times, but has seen these measures die in the opposite chamber. "We're hoping we get something back from the House this year," he said. With more than two-thirds of Representatives signed on as co-authors to the identical House companion bill, that seems likely this session.

Thursday, the Senate Business and Commerce Committee considered a bill by committee chair and North Richland Hills Senator Kelly Hancock that seeks to end the practice of surprise billing from health insurance companies. Hospitals and other health care facilities often employ contracted staff who work for companies who participate in different insurance networks. If the patient seeks care at an in-network facility and believes they are receiving care covered through their policy, it can be a shock to receive bills for hundreds or thousands of dollars for care from out-of-network physicians and technicians. This status quo punishes the patient for what is essentially a payment dispute between providers and insurers, said Hancock. "This just is an issue that stinks," he said. "It's an issue between doctors and insurance companies…and patients get stuck in the middle of this argument." Because patients can't choose which physicians and technicians give them care, Hancock argues that a true free market doesn't exist in the healthcare industry.

His bill would prohibit surprise billing when a patient has no choice in who is treating them. If a person receives care from an out-of-network provider at an in-network facility or out-of-network emergency care, SB 1264 would prohibit billing beyond co-pays, deductibles and other expected out-of-pocket expenses. It would settle disputes over payments between insurers and providers through existing mediation procedures at the state Department of Insurance, which according to testimony offered Thursday, has proven very effective in resolving these disagreements. The bill requires that state-regulated insurance companies pay the "usual and customary rate" or an agreed upon rate for out-of-network emergency care or facility providers. Self-funded insurance plans regulated at the federal level could opt in to state protections provided under this bill beginning in 2021.