(AUSTIN) — Senators unanimously approved a multi-billion dollar Harvey aid package Wednesday aimed at helping communities still struggling to recover after the historic storm and prepare for the next one. "On August 27th, 2017, the National Weather Service issued this warning: 'This event is unprecedented and all impacts are unknown and beyond anything ever experienced'," said Conroe Senator Brandon Creighton. "It's been 20 months and we're finally understanding the total impact of this unprecedented thousand-year storm called Hurricane Harvey." 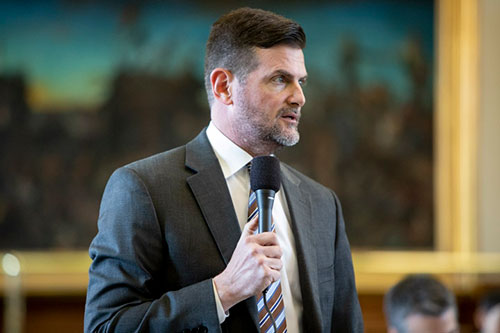 Conroe Senator Brendan Creighton represents an area devastated by Hurricane Harvey in 2017. He was one of three members, along with Brenham Senator Lois Kolkhorst and Lubbock Senator Charles Perry, to offer a comprehensive aid package Wednesday that includes aid for recovery as well as planning for future events.

The first measure, SB 6 by Brenham Senator Lois Kolkhorst, would direct the Texas Department of Emergency Management at DPS and other relevant agencies to develop a model guide based on best practices to help local officials respond in the aftermath of a natural disaster. "During Senate Finance hearings, we kicked off every hearing with an update from Hurricane Harvey, and one of my favorite lines was from Senator [Larry] Taylor who said 'Surely we've been through enough disasters, we almost need a how-to manual'," said Kolkhorst. "That is the basis of SB 6." This manual would include direction on applying for federal aid, cooperation with volunteer aid agencies, meeting housing needs in the short- and long-term and debris removal. Additionally, it would direct the same agencies to devise a program to train and credential emergency response coordinators and directors. Finally, it would require TDEM, in conjunction with emergency response experts at Texas A&M, the Department of Transportation and Commission on Environmental Quality, to create a best practices guide for debris removal, which proved to be a particular challenge in the wake of Harvey.

The next measure also looks ahead to plan for future flood events, not only those coastal floods caused by hurricanes, but anywhere in the state. Lubbock Senator Charles Perry led an interim study that met with stakeholders to determine how to craft a uniform, statewide flood response and mitigation plan. The result is SB 8, which would create the first flood plan based on watershed regions and coordinate those regional plans into an overall state plan. Perry said that this proposal is long overdue. "As I was going through the process of developing this bill, it was clear to me that we've had many, many projects over the past several decades that were great ideas," he said. "Had they only been implemented or funded or made a priority, Harvey's effects would've been minimized." Facilitated by the Texas Water Development Board, regional stakeholders will develop and construct the most effective projects to preserve life and protect property during flood events. The state board will ensure these regional plans don't negatively impact neighboring regions.

The framework to pay for all of this comes through Creighton's SB 7. The Texas Infrastructure Resiliency Fund created by this measure was appropriated $1.65 billion in the supplemental budget bill approved by the Senate last week. It will pay for flood mitigation projects identified by the regional flood planning process set forth in SB 8 by offering grants and low-interest loans to local jurisdictions for development and construction.

Additionally, the bill would help pay for local fund matches to draw down federal dollars both for recovery and mitigation projects. Many federal aid programs require that applicants contribute some amount of funds up front, but some communities in need don't have this ante money. The TIRF would help provide most of these matching funds, but would still require that the local entity contribute a quarter of the necessary amount. "This bill brings Texas tax dollars back to Texas, maximizing federal recovery funds," said Creighton. It will also provide matching funds for projects partnering with the U.S. Army Corps of Engineers, such as the long awaited coastal barrier project intended to protect ports along the upper Texas Gulf Coast from future storms, developed following 2008's Hurricane Ike.

The Senate will reconvene in regular session Monday, March 25 at 10:30 a.m.