(AUSTIN) — Texans may have to wait until the age of 21 to purchase tobacco and nicotine products under a measure heard before the Senate State Affairs Committee. That was one of several bills on Lt. Governor Dan Patrick's list of "priority legislation" heard in committee on Monday. Bills are given numbers based on the order they are filed, however the Lt. Governor usually reserves the lowest bill numbers to assign to bills he and the majority of Senators consider important legislation. This session, Patrick reserved the 30 lowest, and seven of those bills were heard in committees Monday. 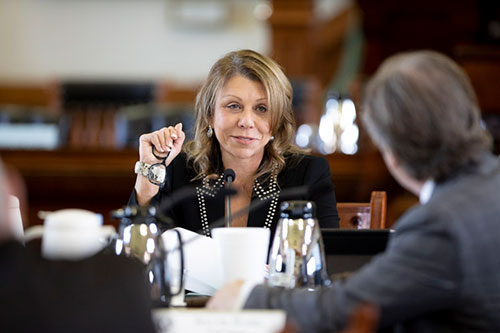 State Affairs Committee chair and Houston Senator Joan Huffman offered a bill Monday to raise the age to purchase tobacco and other nicotine products from 18 to 21.

SB 21, by Houston Senator Joan Huffman, would raise the minimum legal age to possess or use tobacco products from 18 to 21, including e-cigarettes and other nicotine vaporizing devices. While tobacco use is down statewide, there are parts of Texas where the habit remains hard to kick. North Texas is a particularly notable area, with a University of Texas study showing that twenty-five percent of adults in the region still smoke cigarettes daily, compared to 15 percent in the rest of the state. Huffman believes raising the smoking age will also discourage use among minors. "Raising the MLA to 21 for this offense would help keep cigarettes, e-cigarettes and tobacco products out of Texas public schools by creating more social distance between younger high school students and of-age purchasers, thereby reducing early addiction to nicotine and tobacco." If passed into law, the bill would make Texas the eighth state to raise the smoking age to 21. It remains pending before the committee.

Another priority bill in front of State Affairs Monday would prohibit registered lobbyists from seeking public office. "Texans expect their elected officials to represent their interests," said bill author Senator Brandon Creighton of Conroe. SB 13 would also seek to reduce the "revolving door" between serving in government and becoming a lobbyist by placing a two year cooling down period between a legislator leaving office and registering as a lobbyist. Creighton said that Texas is one of only nine states with no restrictions on lawmakers walking out of office and into a lobbying firm. Finally, the bill would require that state campaign financial disclosures be hosted on the Ethics Commission website.

Other low-numbered bills considered by State Affairs Monday include SB 9, by Senator Bryan Hughes of Mineola, which aims to improve election security by requiring a paper record of any ballots cast through an electronic voting machine. SB 22 by New Braunfels Senator Donna Campbell, would prohibit state and local government agencies from funding abortion providers with public money. SB 29, by Edgewood Senator Bob Hall, would prohibit taxpayer funded organizations or political subdivisions from hiring lobbyists using public money. Finally, SB 30, by Granbury Senator Brian Birdwell, aims to increase transparency on ballot questions regarding public debt, requiring that each bond for different purposes be listed as separate propositions, rather than a single proposition including multiple bonds for multiple purposes.

The Finance Committee also heard a low-numbered bill Monday, one that would give the state's natural parks and historical sites a dedicated revenue stream for the future. SB 26 and Senate Joint Resolution 24 would place a question on the November ballot asking voters to approve the dedication of all sporting goods sales and use tax revenues toward the Texas Department of Parks and Wildlife and the Texas Historical Commission in perpetuity. "The resolution is designed to ensure that our state parks and historic sites will receive the funding that they need to preserve our natural areas and protect our history," said author Senator Lois Kolkhorst of Brenham. According to the comptroller's biennial revenue estimate, sales on sporting goods are projected to bring in about $342 million in fiscal years 2020 and 2021. If approved, the resolution would take effect at the beginning of the 2022 fiscal year. The bill was approved by the committee and now heads to the full Senate for consideration.

The Senate will reconvene Tuesday, March 19 at 11 a.m.