(AUSTIN) — Members of a Senate panel approved a bill Thursday aimed at making the state's teacher pension fund solvent for the foreseeable future. SB 12, by Houston Senator and Committee chair Joan Huffman, would increase member, district and state contribution rates gradually over the next few years to bring the Teacher Retirement System fund into actuarial soundness. At the end of FY 2018, the fund had $47 billion in unmet debt obligations and a funding period, the time it would take to pay off all of its liabilities under current revenues, of 87 years. If nothing is done, unfunded liabilities would increase to $124 billion by 2050, said Huffman. "Without a long-term, cost-efficient proposal like this, TRS retirees may never see another COLA [cost-of-living adjustment], as the Legislature cannot grant a benefit enhancement by law unless the fund is actuarially sound," she said. To meet that standard, the fund must be able to meet all liabilities within a 31 year period. Huffman's bill would drop that number to 29 years by 2020. 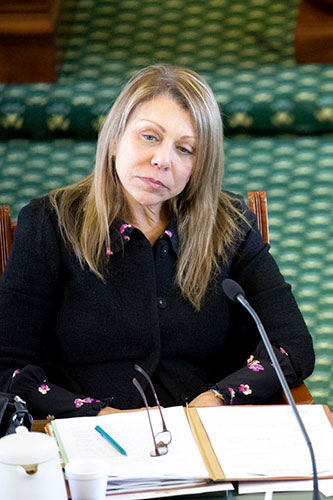 The Teacher Retirement System provides pension annuities for the state's 420,000 retired teachers, supported by a percentage of each active teacher's paycheck, money from school districts, and funds from the state. It's the 13th largest pension fund in the world and the 6th largest in the U.S. The average monthly annuity for a retired teacher is $2078, with almost a third receiving less than $1000 a month. As 96 percent of public school employees don't pay into social security, this annuity is usually the sole source of income for retirees. "These are not lavish retirement benefits, but they certainly are critical to hundreds of thousands of Texans and their families," said Huffman.

Under Huffman's proposal, the active teacher contribution would rise from 7.7 percent today to 8.25 percent in 2024. State contributions would rise from 6.8 percent of payroll to 8.25 percent over the same period, and district contributions would rise from 1.5 percent of eligible payroll to 2 percent by 2025. "I understand that this is a significant financial commitment from the state and other contributors, but this plan is far more cost efficient than simply attempting to contribute one time infusions of cash every so often," said Huffman. Under the bill, retired teachers would be eligible for an one-time bonus check of up to $500, payable in the 2020-2021 biennium.

The Senate bill would cost the state $551 million next biennium, according to Legislative Budget Board analysis. The House plan, HB 9 by Friendswood Representative Greg Bonnen, seeks to accomplish similar goals by raising only the state contribution, up to 8.8 percent by 2025. Huffman says that though the two approaches differ, she's already begun working with Bonnen and she is confident a solution can be reached this session. "I believe the intent of both chambers is to pass a long term, cost efficient plan that fits within the confines of the state budget and works towards eliminating the unfunded liability," she said.

The committee also considered a bill that would provide liability protection for bystanders who attempt to rescue a pet locked in a car on a hot day. According to the American Veterinary Medical Association, when the outside temperature is between 72 and 96 degrees, the temperature inside a car can increase 20 degrees within 10 minutes, and 40 degrees in an hour. "Exposure to extreme heat, even for a short time, can result in severe permanent injury or death for domestic pets," said Laredo Senator Judith Zaffirini. Her bill, SB 250, would protect good Samaritans from civil liability if they see a pet suffering in a hot car and break a car window to rescue it. In order to avoid liability, a person must meet four criteria: they must determine a vehicle is locked, have a good faith belief that the animal is in danger, contact law enforcement or call 911, and use the minimum amount of force to enter the vehicle. The bill remains pending before the committee.

The Senate will reconvene Monday, March 18 at 3 p.m.