(AUSTIN) — The Senate unanimously approved a measure Wednesday to balance state spending over the last two years with what was appropriated in 2017. This is a process that happens every session, as state budgets are written based on projections of revenue and spending for the upcoming biennium. The budget passed this session, for example, will pay for state services in 2020 and 2021. Any unexpected expenses over that period, like natural disaster recovery, will have to be paid for by the 87th Legislature's supplemental budget. Disaster recovery is a big part of this session's supplemental, accounting for $3.1 billion to pay for relief and rebuilding efforts incurred since Hurricane Harvey made landfall in September 2017. In all, the supplemental budget would spend $6.1 billion in state funds: $1.7 billion in general revenue and $4.4 billion from the state's rainy day fund. The rest will come from federal funds. 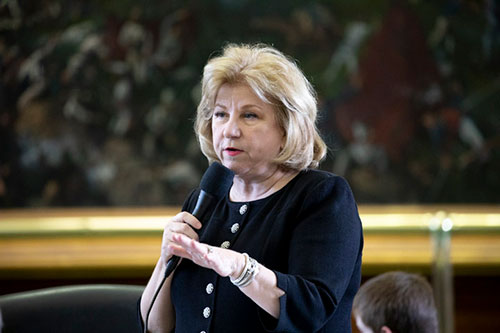 Some of the largest expenses to the supplemental budget are shortfalls in state healthcare spending, which is not unusual. "Every year that's in our supplemental, because we don't know what that number's going to be," said Finance Committee chair and bill author Senator Jane Nelson. "We guess, we go low and we know that we're going to have to true it up in two years. Medicaid numbers are growing." The bill includes $2.1 billion in general revenue to cover that shortfall, and another $160 million to cover shortfalls in the prison healthcare system. It also would spend $542 million to shore up the Teacher Retirement System and to cover a bonus 13th check, up to $500, to retired teachers. Another $100 million will go to pay for improving safety on school campuses to increase security in the wake of 2018's Santa Fe High School shooting.

The $3.1 billion in Harvey-related expenses will address a number of recovery needs. The biggest chunk, more than $900 million, will go to help school districts maintain services while they cope with recovery efforts. Districts' entitlements are based on student population, and most of that entitlement is paid for by local property taxes. The hurricane impacted both factors, causing a reduction in attendance as students whose families were left homeless moved away, and a reduction in property value, and therefore tax revenue, due to storm damage. Another $840 million will go to fund SB 7, which would create the funding framework for the development of the statewide flood plan, to lessen the impact of the next storm, and to create the Texas Infrastructure Resiliency Fund. That money will be used, among other things, to help local communities participate in FEMA public assistance and hazard mitigation matching fund projects. Nelson estimated these funds could draw down as much as $750 million in additional federal aid.

There was some discussion on the floor about spending money from the Economic Stabilization Fund, more commonly known as the rainy day fund. In the past, lawmakers have been reluctant to tap this pool to pay for ongoing costs, like increases in education or healthcare spending, but have occasionally used funds from the ESF to pay for one-time expenses. Senator Larry Taylor represents a coastal region hit hard by Harvey, as well as the city of Santa Fe, and he believes strongly that hurricane relief and school security improvements meet this standard. "Hurricane Harvey affected one out of five public school students in Texas…if we're not going to use the rainy day fund to cover something like that, I don't know when you're ever going to use the rainy day fund," said Taylor. He said he's heard some outside the Capitol questioning the bill's price tag. "You take away Harvey, you take away school violence, and we'll be happy to lower this budget," said Taylor. "But this is what we're having to respond to, these are the events that happened in Texas, and I'll be damned if we don't deal with it." Should all $4.3 billion in ESF funds proposed in the bill end up being appropriated, the balance in the rainy day fund would still surpass $11 billion.

The Senate will reconvene in regular session Monday, March 18 at 3 p.m.