(AUSTIN) — Violent gang activity, drug use and staff shortages are common in Texas' most secure juvenile facilities housing the state's most dangerous youth offenders, according to testimony offered at a Senate Criminal Justice Committee hearing on Tuesday. With media reports of gang riots and drug use, Committee Chair and Houston Senator John Whitmire wanted to hear from Texas Juvenile Justice Department oversight officials about what is causing these problems and how the Legislature can help fix them. 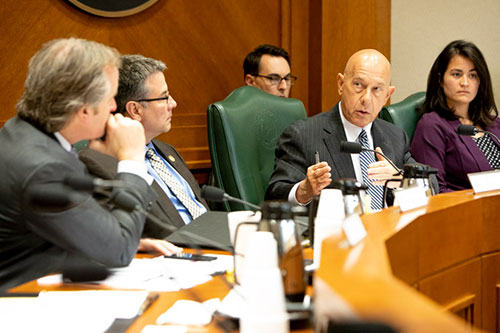 These facilities once held all manner of offenders, serious and minor alike, until a sex abuse scandal in 2007 sparked major reforms in what was then called the Texas Youth Commission. Spearheaded in the Senate by Whitmire, TYC was combined with the Juvenile Probation Commission in 2011 to create the TJJD, with increased focus on community-based intervention and treatment for low-level offenders, with only those convicted of the most serious crimes sent to the five secure facilities. The result of this, said Whitmire on Tuesday, is reduced population, down from a peak of more than 5000 to 834 today, but these smaller numbers are comprised almost entirely of the hardest, most violent youth offenders in Texas.

This has led to increased levels of violence, assaults on staff and other detainees, reports of drug use and gang affiliation, with youth using needles and staples to tattoo gang symbols. Half of these individuals are seventeen or eighteen years old, cohabiting on campuses with children as young as 13. Eighty percent of them have been convicted of a violent crime or a crime against person, and almost half have identified serious mental health issues, twice as many as two years ago.

The biggest contributor to the increase of these incidents, said TJJD Executive Director Camille Cain, is the lack of staff. The optimal staffing ratio is one officer per eight offenders, in some facilities, however, that ratio can exceed one to 14. Whitmire wanted to know why her agency isn't asking for more money. "You haven't even asked for a budget increase," he said. "In Finance, we are marking up your budget as we talk, and I look at my colleagues and say 'I know they've got staffing problems, I know it's dangerous. They're not even asking for a raise.' I'm frustrated by that."

Simply hiring more staff isn't the solution, said Cain, as the difficulty of the job and working conditions leads to 40 percent of new hires quitting within 6 months. "This job is hard, the kids are hard, this place is really difficult," she said.

Whitmire proposed a dramatic solution: one that would transfer all 834 juvenile offenders held at the five TJJD facilities to a currently idle adult prison facility shut down in 2017. Constructed in 1995, the Bartlett State Jail facility in Williamson county can hold 1040 inmates, with an additional 20 individual cells to segregate the most violent youth offenders. "We could immediately provide the security, the safety, the services for these youth that they just aren't getting." Cain expressed concerns about that concentration of violent offenders in one location, but Whitmire was skeptical "Each one of your locations is understaffed, the gangs are tattooing the youth that arrive, and I'm offering up a safe environment where they can get the services they badly need and you're worried about their safety?," he said. "We're going to provide them the safety...if I were in charge we'd do it in the morning."

Whitmire allowed that the proposal needs work and the help of executives at TJJD to realize, but said something has to change drastically. "I don’t know how we sleep another day knowing that that exists if we've got other options," he said. "I will guarantee it will become a state school with all the services that we aren't providing now that they so badly need."

The Senate will reconvene Wednesday, March 13 at 11 a.m.