(AUSTIN) — The last of the bills identified as priorities by the Lt. Governor were submitted before the deadline on filing legislation for the current session arrived last Friday. This includes sweeping reform bills like the school finance proposal, a bill that would raise the smoking age to 21 and one to pay back student debt for people who become peace officers. In a statement released last week, Lt. Governor Dan Patrick said that the slate of 30 bills reflects his own priorities as well as the majority of the Senate. "They strengthen our support for life, liberty and Texas values, increase protections for taxpayers, and ensure that our democracy remains strong and our economy will continue to grow and create jobs," it read. 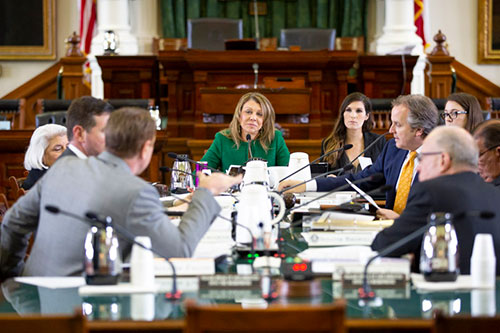 While bills are numbered based on the order they are filed, the Lt. Governor traditionally reserves the lowest bill numbers for legislation he considers important. In the past two sessions, Patrick has set aside numbers one through thirty for these bills. Senate Bill 1, as it is every session, is the state budget. Other major priorities, like the teacher pay raise in SB 3 or the mental health consortium envisioned by SB 10, have already cleared the Senate and are now up for House consideration. More have been considered in committee, like SB 2, which would put a limit on local property tax rate increases before triggering a ratification election, and SB 11, aimed at strengthening school safety.

One such bill, SB 18 by Senator Joan Huffman of Houston, was passed out of the State Affairs Committee on Monday. This bill seeks to protect freedom of expression on college campuses. "I think that college students, our future leaders, should be exposed to all ideas, I don't care how liberal they are or how conservative they are," said Huffman. Her bill would establish a uniform, statewide standard for free expression on campus and reaffirms the state's commitment to free speech. It would define all open spaces as public forums for lawful, non-disruptive displays of expression. Campus administrators can limit things like time, place and manner of expression provided these rules are narrowly tailored and politically unbiased. When considering whether to approve permits for invited speakers, administrators could only consider neutral-viewpoint criteria and couldn't deny application based on the anticipation of controversy. This measure now heads to the full Senate for consideration.

Also in committee Monday, the Senate Finance Committee approved the 2018-2019 supplemental budget to align appropriations made in 2017 with actual expenses over the last two years. The bill's all funds total is $8.4 billion, with $1.7 billion from general state revenue and $4.4 billion out of the Rainy Day fund. $3.1 billion of that latter number is dedicated to costs incurred from Hurricane Harvey "I know those are big numbers," said author and committee chair Senator Jane Nelson of Flower Mound. "But we all knew that the cost of Harvey was going to be significant." Other items in SB 500 include $4.4 million to cover a Medicaid shortfall, $542 million for teacher pensions, $300 million for state hospital improvements and $100 million to harden school campuses and improve safety.

The public got its first look at the Senate version of the school finance reform bill on Friday with the filing of SB 4, by Friendswood Senator and Education Committee Chair Larry Taylor. As expected, the bill would direct more money to students who have dyslexia, are economically disadvantaged or enrolled in bilingual education programs. It seeks to incentivize third-grade reading proficiency as well as readiness for college, the workforce or the military by giving districts more money for every low-income student that meets state standards in those areas. It would also allow districts to create effectiveness-based teacher compensation schedules to give pay raises to the best teachers in the district. The bill was referred to the Education Committee on Monday, but a hearing date has yet to be set.

The Senate will reconvene Tuesday, March 12 at 11 a.m.