(AUSTIN) — Lt. Governor Dan Patrick and members of the Senate announced at a press conference Wednesday the filing of three bills aimed at helping communities recover from Hurricane Harvey and preparing for future disasters. Coastal regions are still struggling with restoration and rebuilding following the 2017 storm, the costliest in American history. Some areas of the state saw 60 inches of rain and damage estimates topped $125 billion. "We said at the time, we would dedicate ourselves to helping people rebuild their homes, their businesses, their communities," said Patrick. "You can't prevent 60 inches of rain falling, but we can do everything we can to mitigate those issues in the future." The three bills announced Wednesday would seek to fulfil that pledge. 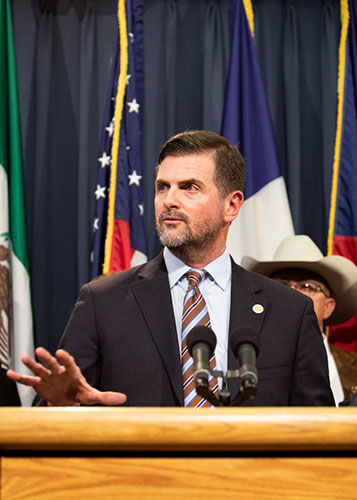 Conroe Senator Brandon Creighton is carrying one of three disaster response bills filed in the Senate Wednesday to aid in hurricane recovery and prepare for future disasters.

Lubbock Senator Charles Perry, who chairs the Committee on Water and Rural Affairs, is the lead author for SB 8, aimed at creating the first statewide flood plan. Perry said that the historic flooding from the hurricane highlighted flood mitigation needs that have gone unaddressed for too long. Under the bill, the Texas Water Development Board would divide the state into flood planning regions based on river basins and allow local officials and stakeholders to develop plans tailored to their area. That agency would ensure that regions work together and that a mitigation plan in one area doesn't conflict with a mitigation plan in another. "Senate Bill 8 is meant to ensure the communication and coordination amongst all of the local entities, that have good ideas, will not conflict with other good ideas in the region," said Perry. These regional plans would be combined into the statewide flood plan.

SB 6 by Brenham Senator Lois Kolkhorst, seeks to keep county and city leaders informed on the best practices for disaster response. "The Lt. Governor and Texas Senate has studied what we learned…what worked and what didn't work, the rescues and recovery," she said. The bill would direct the Department of Emergency Management at DPS to develop a manual to serve as a guide for local officials on debris removal, applying for federal aid, working with non-profit relief organizations and handling housing needs in both the short- and long-term. "Senate Bill 6 will serve as a road map to prepare our state for future hurricanes and natural disasters," said Kolkhorst. Additionally, it would commission experts in disaster response to develop a system to train and credential emergency management directors to oversee response and recovery efforts.

SB 7, by Conroe Senator Brandon Creighton, would create a special fund to pay for flood mitigation projects, hurricane recovery and provide matching funds to pull down federal dollars. Many federal programs have very generous fund matches, up to nine federal dollars for every state dollar, but local entities still have to come up with the initial funds to draw down that federal aid. The framework created under the bill would provide that stake money. "We all know over years and years, we've been a donor state in many different categories," said Creighton. "It's time to get our Texas dollars back and working for us".

Flood mitigation projects identified and developed by regional flood planning authorities could be paid for through this fund, in the form of both grants and low- or no-interest loans. Patrick said that $3 billion will be drawn from the Rainy Day Fund to pay for Harvey recovery: $1.8 billion to fund the bills announced Wednesday and $1.2 billion to pay back recovery and response costs incurred by local and state agencies during the last year and a half. Some of that money will also go towards school districts to cover tax revenue lost due to the devaluation of property from storm damage. Kolkhorst said that some of these numbers could change as state budget writers work through the process.

The Senate will reconvene in regular session Monday, March 11 at 3 p.m.