(AUSTIN) — The president of the Santa Fe School Board told members of the Senate Education Committee about his community's experience in dealing with the aftermath of a mass shooting as the panel considered an omnibus school safety bill Tuesday. The shooting at Santa Fe High School on May 18th last year took 10 lives and injured 13 more. Rusty Norman told lawmakers that he hopes what happened to his community in 2018 can motivate significant action addressing this problem. "If we're going to put a stop to the epidemic of violence in this country, we've got to start somewhere, and Santa Fe ISD is willing to be that catalyst if they have to be in order to move forward with this," he said. Governor Greg Abbott identified school safety as one of the session's top priorities and declared the topic an emergency issue in his February 5th State of the State address. 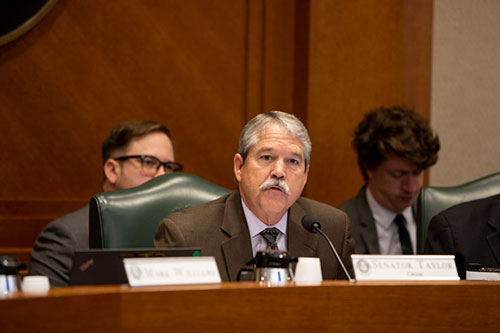 In the aftermath of the tragedy, Norman said, administrators looked for ways to restore a sense of safety to the student body while increasing campus security. They implemented security entrances with metal detectors, improved locks and alarm systems, and added security personnel. But building security is only one aspect of school safety, he said. "Santa Fe ISD, on May the 17th, thought that it was in really good shape when it came to safety and security," said Norman. Mental and emotional health services, sometimes as simple as having a sympathetic teacher to talk to, he said, are key to avoiding future incidents. "I do not understand a lot of today's social media type things and some of the peer pressures that kids face today," he said. "I'm from a much older generation. These kids, they want someone to talk to that they know understands." He advocated for student input into the process, as well as legislation that gives local districts flexibility to tailor security solutions to unique regional needs.

Committee chair and Friendswood Senator Larry Taylor said his school safety omnibus bill, SB 11, will serve as a starting point to craft a consensus measure. As filed, it includes requirements for planning and training, future campus design, cooperation with resource centers, as well as money from the Rainy Day Fund for a one-time funding source to upgrade security on existing campuses. It would also seek to incentivize more people to become school counselors through a student-debt repayment program. "We say a lot of times that education is the most important thing we do in Texas, but it's really just right below public safety," said Taylor. "We have to make sure we do everything we reasonably can within our power to make sure [Santa Fe] isn't repeated."

On the floor today, the Senate unanimously approved a bill that could help with that goal by using telemedicine to improve mental health care services for children and adolescents. SB 10, by Flower Mound Senator Jane Nelson, would create a consortium for state health-related institutions of higher education to coordinate efforts to improve mental health services in the state. She told her colleagues that she is deeply disturbed by the effects untreated mental illnesses are having on the youth of Texas. "There are kids that need help," she said. "They're committing suicide and they're overdosing on drugs and they are shooting up schools, and we've got to do something about it." She said she hopes this bill will improve early intervention and avoid future mental health crises.

In seventy five percent of cases, said Nelson, it is pediatricians who identify emerging mental health issues but they often don't feel comfortable managing treatment. The consortium would create a telemedicine system to allow them to consult with psychiatrists and other professionals when young patients present with early signs of mental health issues. It would also be charged with developing a program that leverages telemedicine to deliver mental health assessments and intervention to at-risk students. The bill includes requirements for written parental consent for all services as well as compliance with state and federal health privacy laws.

The Senate will reconvene Wednesday, March 6 at 11 a.m.