(AUSTIN) — The Senate passed its first bill of the session Monday, one that would give every public school teacher in the state a $5000 pay raise beginning in the fall semester of 2019. Named as an emergency issue by the governor, the bill would give teachers their first meaningful pay raise in 20 years, said author and Flower Mound Senator Jane Nelson. "The one thing we should do, first and foremost, is to recognize the need to uplift our entire teaching profession," she said. According to testimony offered by Texas education commissioner Mike Morath last week, most teachers in the state make between $50,000 and $60,000 per year, including bonuses and other incentives. All 30 members joined Nelson as co-authors of the bill. 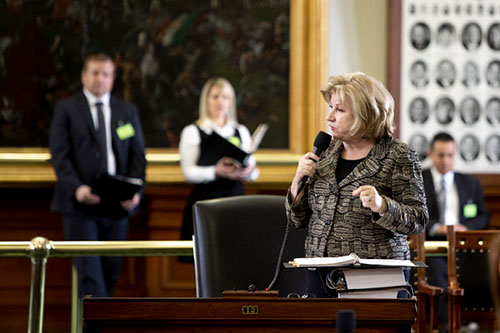 Senator Jane Nelson of Flower Mound was joined by all 30 other members to author a bill that would give every public school teacher and librarian in Texas a $5000 annual pay raise.

The bill would cost the state right at $4 billion next biennium: $3.7 billion to pay for the raises for the state's 350,000 teachers and $240 million in additional pension costs. An amendment added to the bill by Nelson would give the same raise to school librarians, at a cost of $53 million. Nelson told members that this raise, if signed into law, wouldn't preclude additional, effectiveness-based pay schedules expected in forthcoming school finance legislation. The bill now heads to the House for consideration.

In committee action Monday, the Senate State Affairs Committee approved a measure aimed at ensuring the proper reporting and investigation of all sexual assault allegations on college campuses. Bill author and committee chair Senator Joan Huffman of Houston said that studies show that one in five female college students have experienced some form of sexual assault. SB 212 would require that any university employee that either witnesses or receives information of sexual harassment, assault, dating violence or stalking reports the incident to the institution's Title XI coordinator for investigation. It also requires the coordinator to make a monthly report on the number and status of sexual assault investigations to the institution's president, and requires the president to make the same report to the institution's governing board once a semester. That report would be made publicly available, though the identities of individuals within would be concealed.

The bill also has strong penalties for non-compliance. Employees failing to report incidents of sexual assault would be terminated, and if the person intentionally tried to cover the incident up, they would face a Class A misdemeanor charge. The university itself could also face disciplinary action as failure to comply with the bill's requirements could incur as much as a $2 million penalty. "I am confident that this bill strengthens the reporting requirements to ensure that the days when an outcry went unheard or covered up at an institution of a higher education are over," said Huffman. A similar version of this measure cleared the Senate 30-1 last session, but failed to reach the governor's desk.

The committee also passed a bill that would facilitate cooperation between state agencies on anti-human trafficking efforts. According to the Office of Attorney General, at any given time there are 234,000 victims of human trafficking in Texas, with nearly 80,000 of those victims being children or minors. SB 72, also by Nelson, would create a centralized body to formulate a statewide plan to combat human trafficking and facilitate cooperation between state agencies that work to fight the practice. "If we don't do everything we can to address this, we are allowing slavery to take place in this state," said Nelson. "My commitment is there both in financial resources and anything else we need to do to put a stop to this." As chair of the Senate Finance Committee, Nelson said she funded every agency request for human trafficking programs at a total cost of almost $89 million. She said she intends the State Human Trafficking Prevention Coordinating Council created by this bill to help maximize the impact of these funds and ensure that agencies aren't duplicating efforts.

The Senate will reconvene Tuesday, March 5 at 11 a.m.