LEGISLATION COULD END "SURPRISE BILLING" FOR MOST

(AUSTIN) — The practice of billing insured patients excessive amounts for non-network care at in-network facilities could end if a measure unveiled Thursday by Senator Kelly Hancock of North Richland Hills becomes law. Known as surprise billing, this happens most commonly in emergency room visits when individuals go to a facility covered by their health plan. Later, they find out that some service providers who saw them, like imaging technicians or emergency room doctors, are contracted employees and not in-network. This can mean much higher out-of-pocket expenses for the consumer. Often, the first indication of these charges comes in the mail in the form of bills for hundreds or even thousands of dollars. Hancock's proposal, SB 1264, could effectively end the practice for most insured Texans. 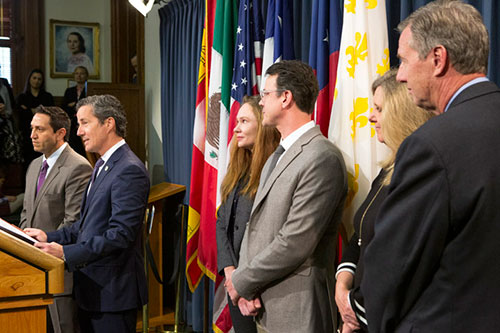 Hancock passed the first legislation addressing surprise billing practices as a House member in 2009, creating a process by which patients can seek remedies to excessive, unexpected medical bills by requesting mediation through the Texas Department of Insurance. He said that system has so far saved patients more than $30 million in out-of-pocket medical costs. "Still, thousands of Texans receive unexpected and frankly, unreasonable surprise medical bills every year," said Hancock. "Enough is enough." Since these disputes are actually between the service provider and the insurer, Hancock says there's no reason for the consumer to be involved. "TDI mediation will continue, but without patients being put in the middle," he said. "The fact is that market negotiators in these situations are the providers or facilities and their health plans. This legislation acknowledges that fact." The bill introduced Thursday would leave it up to those parties to seek mediation, and would leave the patient out of it.

The key language in the bill would forbid providers from billing people insured through state-regulated health plans such as preferred provider organizations (PPO), health management organizations (HMO) or the state pension systems for services received at an in-network facility more than their responsibility defined under the plan. Hancock says this is intended to apply to situations where a patient has no option in who is providing their care, like emergency care or out-of-network physician services at in-network hospitals. The patient would still be responsible for co-pays, co-insurance, deductibles, and other out-of-pocket expenses as defined by their plans, but wouldn't be on the hook for costs above that. The bill also includes an opt-in provision for people under federally-regulated, self-funded ERISA health plans, which Hancock says makes up at least 40 percent of the state's health insurance market. "It's our hope that by including these plans in mediation, Texas will send a loud and clear signal to DC: that similar consumer protections need to be passed at the federal level," he said.

Also Thursday, the Senate State Affairs Committee considered a bill that would prohibit local ordinances regulating private businesses. Saying this was solely the responsible of the state, bill author and Conroe Senator Brandon Creighton's SB 15 would pre-empt ordinances like ones in Austin and San Antonio mandating that private businesses offer paid sick-leave to employees. Moreover, he believes such local rules threaten the state's business-friendly environment. "Less government, lower taxes and fair, predictable regulations are why companies are moving here, why companies are expanding once they get here, and why we continue to be the benchmark for job creation in this nation," said Creighton. A state district court ruled last November that Austin's ordinance violated the state's minimum wage law and prohibited implementation of the new rule. The bill remains pending before the committee.

The Senate will reconvene in regular Session on Monday, March 4 at 3 p.m.