(AUSTIN) — The Senate Committee on Property Tax considered legislation Tuesday intended to give property owners a fairer process when protesting the appraised value of their homes and taxpayers more transparency when deciding whether to vote for or against local bond proposals. The first measure, SB 462 by New Braunfels Senator Donna Campbell, seeks to provide more information for voters when taxing jurisdictions seek approval to issue bond debt. According to the state's Bond Review Board fiscal year 2018 report, local governments today carry $230 billion in debt, an 18 percent increase over the last five years. About two-thirds of that is in the form of general obligation bonds, which are repaid by property taxes, and can therefore drive up property tax bills. "Ultimately [the bill] is about just giving voters a clear picture of local debt and its effect on their property taxes when they are asked to vote on a bond," Campbell said. 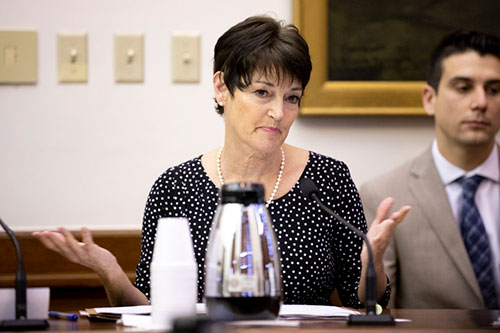 Senator Donna Campbell of New Braunfels offered legislation that would put more information about local debt directly on the ballot in bond elections.

Her bill would require certain information to be disclosed directly upon the ballot form in a bond election. "Placing this information on the ballot where voters are asked to approve of the bond is the most transparent place to ensure that voters can make an informed decision about the debt," she said. Taxing jurisdictions would have to disclose the purpose of the bond, the principal amount, and the fact that it could lead to increased tax rates if approved. Additionally, the jurisdiction would have to list the total amount of existing debt carried on the entity's books and the portion of a taxpayer's property tax bill that goes to pay down that debt.

The next bill, SB 67 by Flower Mound Senator Jane Nelson, would make a number of changes to the requirements for members of the body that hears tax protests from homeowners. Along with the increase in tax rates, rising property values are often cited as one of the major drivers of increased property tax bills. When owners believe their property has been appraised above market value in the periodic appraisal process used to determine the value of taxable property within a jurisdiction, they can protest that valuation to the local appraisal review board (ARB). A 2018 survey on ARB performance conducted by the state comptroller, found that respondents felt the three-member boards as a whole generally performed satisfactorily, with more than 80 percent saying that their board as a whole was fair. When considering individual members, however, the numbers get much lower, with almost two-thirds of respondents identifying a single board member as unfair.

Nelson's bill would seek to address issues of unfairness and dissatisfaction by requiring that any evidence used by the ARB be presented to the home owner prior to the hearing, or it cannot be submitted into the process. It would set term limits for board members and require them to have more training on equal and uniform property appraisal.

During interim hearings on property taxes in 2016, Bettencourt said his committee heard reports that some individuals were threatened with even higher property values if they didn't drop the protest. "We were taking public testimony that people were being told that the value could go up, you should settle," he said. "That's just wrong," replied Nelson. Her bill would prohibit an ARB from further raising an property's value above the protested value to coerce the taxpayer to settle the complaint.

Nelson said this bill is identical to a bill that received unanimous support in the Senate last session, but didn't clear the House. Additionally, most of the measure's provisions are also included in Bettencourt's major tax reform bill, SB 2, passed out of the Property Tax Committee February 14th, so it will likely find some path back to the House again this session.

The Senate will reconvene Wednesday, February 27 at 11 a.m.