SENATE BILL WOULD RAISE PAY FOR ALL TEACHERS

(AUSTIN) — Every public school teacher in Texas would get a five thousand dollar annual pay raise starting in the 2019-2020 school year under a bill approved by the Senate Finance Committee Monday. Committee Chair and bill author Senator Jane Nelson of Flower Mound said that Texas teachers haven't seen a significant pay raise in 20 years, while the cost of living continues to rise. "We need to provide this salary in order to retain our teachers in our classrooms, and to attract new teachers to the profession," she said. "We've got to make sure we attract the best and the brightest, and we've got to keep them." The committee later heard testimony from a number of public school teachers that low salaries often mean working multiple extra jobs that still don't quite make ends meet. Unsurprisingly, most supported the bill, but many asked that lawmakers find a way to also increase pay for librarians, custodians and other public school paraprofessionals that aren't classified as teachers. 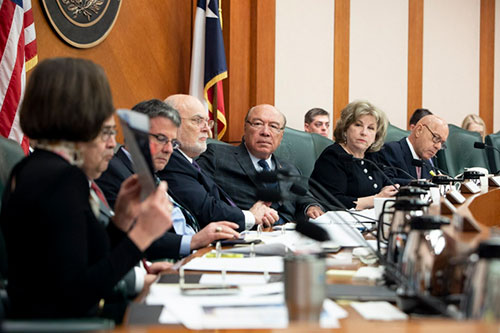 On Monday, Members of the Senate Finance Committee unanimously approved Chair and Flower Mound Senator Jane Nelson's (second from right) measure to give every public school teacher in Texas a $5000 annual pay increase.

According to state education commissioner Mike Morath, the vast majority of teachers in the state are paid between $50 and $60 thousand annually, including additional duty pay above base salary. The average teacher starts out at $47,500 per year, and can see that amount rise slowly every year, as most teacher compensation under current law is based on years of service. The Texas Commission on School Finance, an interim study group formed to make recommendations for sweeping education finance reforms, found that the single greatest in-school factor for student achievement is teacher quality. The findings from that interim study will likely be central to any education finance reform package considered in both chambers. Senate Education Committee Chair and Finance member Senator Larry Taylor, who is currently working to craft the Senate's version of education reform legislation, told members that the bill complements the teacher compensation reforms envisioned in that measure.

The School Finance Commission identified the Dallas Independent School District as a model for salary schedules that can identify and reward their highest quality teachers. Dallas dropped the seniority-based system in the 2013-2014 school year and moved to an effectiveness-based system. The results after five years show improvement; Dallas students saw achievement gains double the state average, the number of students educated in the lowest-scoring campuses fell from nineteen to one percent, and the district had the highest number of schools receiving an "A" grade under the state's accountability system of any urban school district. The across-the-board pay raise bill considered in Senate Finance Monday wouldn't prevent the implementation of this or other effectiveness-based compensation system, emphasized Nelson.

The proposed Senate budget has $3.7 billion set aside to pay for the salary increase, but that price tag will go up a little more after it was changed to ensure the state covers increased pension costs. Because teacher retirement benefits are based on an average of the five highest-paid years in an educator's career, a statewide increase like the one proposed would increase the total cost of teacher pensions by about $240 million per year over the next two years. Another amendment added by the committee seeks to ensure the raises are permanent. Nelson said she can guarantee that she'll fight to maintain the raise as long as she's in office, and that any future legislatures would have to make a proactive decision to remove it from statute. "If this passes it will be an established fund and if somebody's going to change it, they're going to have to go back and revoke what we're doing here today," she said.

With 22 of 31 Senators signed on as co-authors of the bill as of Monday afternoon, SB 3 should have a clear path out of the Senate. Whether or not members of the House support such a measure, or one that blends approaches, will remain to be seen.

The Senate will reconvene Tuesday, February 25 at 11 a.m.