(AUSTIN) — Recent discoveries of massive energy reserves in west Texas will only enhance the already booming energy industry in the state according to testimony offered before the Senate Committee on Natural Resources & Economic Development Wednesday. As part of the first meeting of the session, newly named Chair and Granbury Senator Brian Birdwell invited all three Railroad Commissioners to brief lawmakers on the status of the state's oil and gas industries. Despite its name, the agency has nothing to do with rail in Texas but rather oversees the state's largest industry, which accounts for almost a third of state gross product. That seems likely to continue, or even grow, following discovery of what the U.S. Geological Survey called the largest continuous oil and gas potential ever. "The good Lord has given the state of Texas in the last two years, the largest discovery of oil and gas in the history of the world," said Commissioner Wayne Christian. The reserve found in the Wolfcamp Shale and Bone Spring Formation in West Texas is estimated to contain more than 46 billion barrels of oil and 281 trillion cubic feet of natural gas. In calendar year 2017, the state produced 1.03 billion barrels of oil and 7.6 trillion cubic feet of natural gas, so the new discovery could support decades of production at current levels. 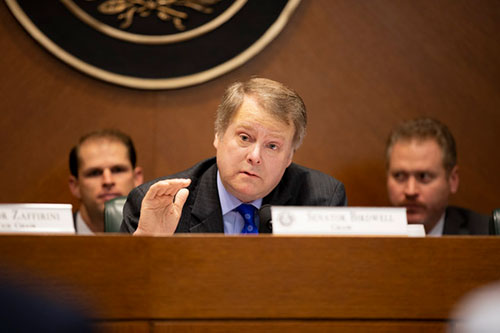 Granbury Senator Brian Birdwell held his first hearing as chair of the Senate Committee on Natural Resources and Economic Development, getting an update from the agencies that deal with energy production, environmental policy and workforce services.

Even before this discovery, Texas oil and gas production was operating at a pace not seen in 40 years, topping 1 billion barrels in annual production in 2015 and 2017 for the first time since 1978. Thanks to advents in drilling technology and techniques, previously unrecoverable resources locked in shale deposits are now fueling immense growth in Permian Basin production. More than 350,000 people in Texas work in the industry, and national production, led by Texas oil fields, topped 10 million barrels per day, surpassing Saudi Arabia and Russia to make the U.S. the leading energy producer in the world, said Christian. Were Texas its own country, he added, it would rank as the third largest producer of oil and gas in the world.

Commissioners laid out their top budget priorities as well, highlighting needs for staffing, IT modernization and expanding the well-plugging program. Most wells are plugged by operators after they stop producing, but there are thousands of abandoned wells that the state will have to manage. These "orphan" wells can present a public health hazard, as they leak pollutants into the surrounding air and water after years of neglect. Last session, the Legislature set a target for the Railroad Commission of 1900 wells plugged, a mark the agency has already exceeded, said Commissioner Christi Craddick. She thinks the agency will easily reach 3000 wells capped by the end of the biennium. "This is a vibrant program that we want to continue," said Craddick.

Current law requires that oil and gas producers purchase bonds in order to drill in Texas, to cover the cost of plugging wells should a company go out of business. Of the 440,000 wells in the state, about 130,000 are no longer producing, said Commissioner Ryan Sitton. "Most of those are OK, they're being managed by operators, they're being inspected, and maintained," he said. As well-drilling becomes more and more complex to access more difficult sources of oil and gas, said Sitton, many old, vertical wells, often drilled before bonding laws took effect, will become the state's responsibility. "Despite the growth in industry, the demand for us to plug wells is also going to go up," he said. The Commission has requested an additional $39.1 million in the next biennium to support this program.

The Senate will reconvene Thursday, February 21st at 11 a.m. for reading and referral of bills.