(AUSTIN) — Mental health care for children and adolescents would be coordinated by a central commission charged with increasing detection and access to treatment under a bill approved by the Senate Health and Human Services Committee on Tuesday. Another of Governor Greg Abbott's emergency items for the session, the Texas Mental Health Consortium would be created through SB 10 by Flower Mound Senator Jane Nelson. As chair of the Finance Committee, Nelson filed a base budget bill that includes more than $7 billion for mental health services across state agencies. This bill would create a board to ensure that those agencies coordinate and cooperate to improve mental health services in Texas, especially for children. She said that the dire need for better mental health care for minors was impressed upon her by the Santa Fe High School shooting last May as well as the surge in youth suicides in recent years. "As we've seen with recent acts of violence, increased suicide rates and lives shattered by drug and alcohol abuse, Texas students need our help," said Nelson. 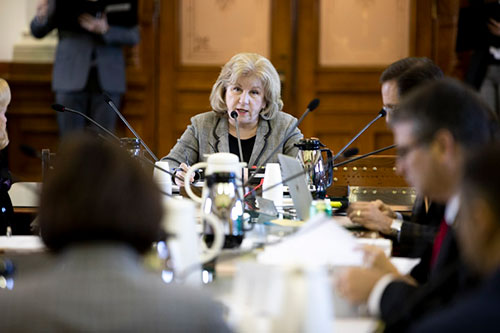 Texas is facing a significant shortage of mental health professionals. According to a 2016 University of Texas at Austin report, 206 of the 254 counties in Texas fall short of the 1 provider to 30000 population ratio recommended by the federal government. SB 10 looks to address these gaps by creating comprehensive child psychiatry centers, what Nelson called "hubs", at state medical schools and other health-related institutes of higher education. These hubs would provide mental health consultation services from on-call mental health professionals, via telemedicine, to pediatricians and family physicians. Nelson said that in 75 percent of cases, it's pediatricians who first identify developing behavioral health disorders, but many feel uncomfortable managing treatment.

The centers will also use remote services to conduct behavioral health assessments for at-risk students. It would authorize these students to have two consultations via telehealth services with social workers or other mental health care professionals, and then determine if a referral for additional treatment is called for. "We need to identify mental illness early, we need to treat it without stigmatizing it, just as we would any other physical condition," Nelson said. "I firmly believe that this legislation will help identify youth at risk, get them to treatment, and prevent them from becoming a danger to themselves or others." She said the goal is to work with local school districts to ensure that these programs are available in every region across the state.

Identifying and treating mental health disorders in children as early as possible is key to better outcomes, according to testimony offered by psychologist and mental health policy expert Dr. Andy Keller, who helped develop SB 10. The reason that mental health has become a crisis is that too many disorders go unidentified and untreated for too long, he said. According to research, the time between the appearance of behavioral health disorder symptoms and treatment averages ten years. "Just like any illness, if you wait that long, and you wait until it's a crisis until you intervene, it's going to be much harder to help, it's going to be far more risky to the individual as well as the folks around them," said Keller. "The point of this bill is to help us help children as soon as possible." He highlighted the detection provisions in the bill, which would help identify emerging mental health disorders in both pediatricians' offices and public schools, as well as opening pathways towards treatment and other mental health services through telemedicine and telehealth programs. "It's not just physicians, it's also social workers, other people who can be of help," said Keller. "Because it's not actually even usually medication that's helpful, it's a range of things, and a lot of support to parents."

The bill received unanimous support from the committee and won't face much opposition moving through the Senate, as all 31 Senators are signed on as co-authors of the measure.

The Senate will reconvene Wednesday, February 13 at 11 a.m.