(AUSTIN) — Governor Greg Abbott and Lt. Governor Dan Patrick vowed that the state will deliver on a promise of education and property tax reform in their addresses to the crowd at the Inauguration Ceremony on the Capitol Grounds Tuesday. Cloudy and cold, the masses still turned out to hear Patrick and Abbott renew their oaths and lay out their plans for the future. In his speech, Patrick focused on bipartisanship and praised the way the Texas Senate works across party lines to deliver good government to the people of the state. "In Texas we're different," he said. "We work together for the people of Texas because that's what you expect us to do. The elections are over….for right now, and for the next 140 days, you expect us to do the work of the people." Of the almost 1600 bills passed in the Senate last session, Patrick said, only 23 were passed strictly on party-line votes. 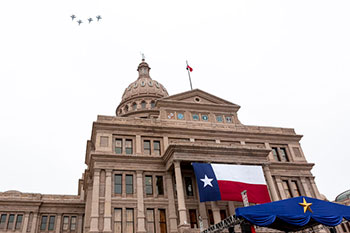 Fighter jets fly over the State Capitol to commemorate the Inauguration Ceremony for Gov. Greg Abbott and Lt. Gov. Dan Patrick on Tuesday.

It wasn't just cross-party cooperation Patrick previewed, but cross-chamber, working with the House of Representatives to pass an ambitious agenda. Patrick praised incoming speaker Dennis Bonnen, bringing him to the podium to emphasize the unity between the House and Senate. "We are united to work for the people of Texas on three big issues," he said.

Those issues are property tax reform, education finance reform and increased teacher pay. He announced that the Senate will take up a bill, SB 3, to give every teacher in Texas a $5000 across-the-board pay raise, paid for with $3.7 billion in new state revenue toward education. "We're putting teachers first this session," said Patrick. "it's been 20 years since they've had an across the board raise." While the Senate's property tax reform package hasn't been filed yet, one goal highlighted by the Lt. Governor was a freeze on property tax increases on seniors 65 and older.

Patrick concluded his remarks with another appeal towards cooperation. "We are at a point of deep divide in our country," he said. "Here in Texas we can lead, to show the nation the way…to do what you expect us to do." 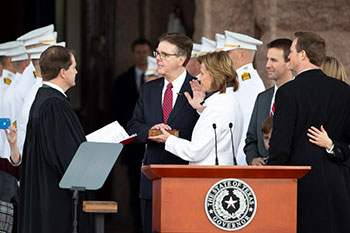 Next, Governor Greg Abbott took his second oath of office. Like Patrick, Abbott promised a sweeping reform package for property taxes and education finance. "I want to make this very clear," he said. "We're going to do this session what no one thinks we are capable of achieving. We are going to finally fix school finance in Texas." On property taxes, Abbott sees an "archaic system" where skyrocketing rates are pushing people out of their neighborhoods and keeping young people from purchasing houses. He listed three policy proposals to address this problem. First is a limit on property tax growth and the second is an end to unfunded mandates on local jurisdictions from the state level. Third, he wants to give citizens more control over the retention of property tax assessors. "Taxpayers should be given the power to fire their tax appraiser," he said.

It will be up to members of the Legislature to formulate the specific plans to achieve these goals. The state constitution prohibits the passing of legislation in the first 60 days of session, but gives the Governor power to get around this restriction by tagging certain issues as emergencies. Traditionally, governors lay out these emergency issues in their State of the State address before both chambers every session. While it's not certain what issues will get the tag when Abbott delivers his address on February 5th, it's likely that education finance and property tax reform will top that list.

The Senate will reconvene Wednesday, January 16 at 11 a.m.