(AUSTIN) — Tuesday marked the beginning of the 86th session in the Texas Senate, a 140 day term in which state leadership has pledged to tackle the complex issues of public school finance reform and property tax reform. Governor Greg Abbott was on hand to welcome the members, new and current, and promised to finally resolve these issues. "We are going to step up and address it," he said. Other major issues facing the Legislature this session include state pension funds and contracting oversight, but like Abbott, Senate leader Lt. Governor Dan Patrick and newly elected House Speaker Dennis Bonnen have highlighted property tax and school finance reform as critical issues this session. 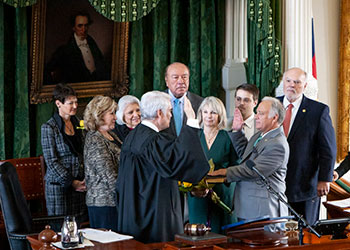 Patrick wasn't present at Opening Day as he was called to Washington D.C. for a meeting at the White House. In his absence, Flower Mound Senator and Finance Committee Chair Jane Nelson led the largely ceremonial proceedings, which included the swearing-in of six new members and the nomination and election of Austin Senator Kirk Watson as President Pro Tem. Nelson becomes the first woman to ever gavel in the Senate on opening day, and as the session closed, Nelson noted from the dais that with the newly elected members, the nine women now serving in the Texas Senate are more than ever before.

Nelson is also the first woman to chair the powerful Finance Committee, which crafts the Senate's version of the state budget for the upcoming biennium. This will be her third session guiding the process. On Monday, she and other Senators learned how much they will have to spend when state Comptroller Glenn Hegar delivered his biennial revenue estimate. Because the Legislature meets only every two years, budgets are crafted prospectively and based on projected revenues. Every session, the Comptroller looks at economic trends, sales and other tax and fee collections and delivers a forecast for how much money the state should make in the next biennium. The estimate for last session was daunting, as economic woes left the state looking at decreased revenue, down nearly $3 billion over the previous biennium.

Things look much better for the 2020-2021 biennium, as a strong national economy and rising oil prices over most of 2018 have left the state with eight percent more revenue than two years ago, nearly $120 billion in total general revenue. The state saw strong economic growth in 2018 of three percent and Hegar projected an even better 2019, calculating 4 percent growth. Despite a strong economy today, Hegar told reporters not to expect things to continue like that in 2020 and beyond. "Texas remains economically well positioned compared to other states, and we will continue to outpace the U.S. economy in the long term," he said. "The forecast for the upcoming biennium, however, is cloudy." He cited some factors; the price of oil is down since October, federal interest rates are up, and both the global economy and US trade policy remain uncertain. Additionally, addressing the public school finance and property tax structures could put more strain on the budget. Hegar's office predicted a more conservative growth rate of 2.5 percent in each year of the upcoming biennium.

Lt. Governor Patrick issued a statement Monday regarding the biennial revenue estimate, and echoed the Comptroller's analysis of the current state economy. "This matches the Senate projections. We face a broad range of fiscal challenges in the 86th Legislative Session and we are committed to property tax reform, increasing teacher pay and school finance reform," it read. "We are confident we can accomplish these goals.”

The Senate will reconvene Wednesday, January 9 at noon. 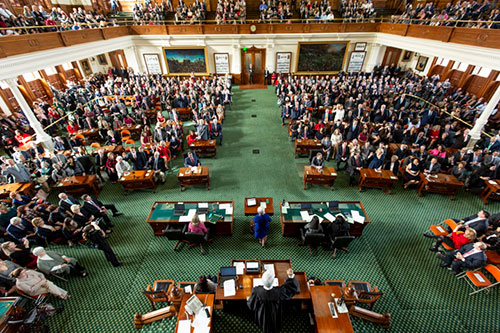 Senators take the oath of office from their desks in a packed Chamber on opening day.