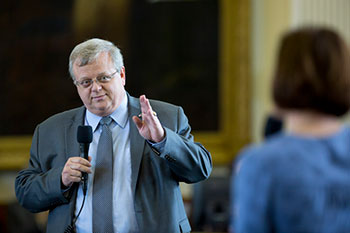 Bettencourt's bill, SB 2, deals with what are called rollback elections. Under current law, if a taxing entity raises the tax rate by more than eight percent in a given year, taxpayers can gather signatures for a petition to hold an election to roll that rate back. SB 2 would lower that threshold to five percent, and would make the election automatic, ending the petition requirement. Bettencourt says it's too cumbersome to put together a petition effort to trigger a rollback election.

Opponents of the bill raised concerns that the measure effectively caps revenue growth for cash-starved cities and counties, and say that the state should let local elected officials decide tax rates. Senator Kirk Watson of Austin cited the huge number of local elected officials who appeared at a Finance committee meeting last week to oppose the measure. "They say it undermines the needs and the wants of their communities," he said. Bettencourt's response to the argument was permitting the voters to decide their own rates is the "ultimate form" of local control.

The second bill approved by the Senate would establish a mechanism for eliminating the state franchise tax. Passed in 2006 to cover the revenue from a decrease in local school property taxes, opponents of the tax say it stifles business growth in the state. Bill author and Senate Finance Committee Chair Senator Jane Nelson of Flower Mound said her bill, SB 17, maps out a way to get phase out the tax. "Many of us would love to see the franchise tax go away altogether, and under this legislation, we put it on a glide path to elimination." The bill would dedicate half of revenue above five percent of growth in general revenue related funds to buying down the franchise tax rate, with the eventual goal of phasing it out altogether.

In committee Tuesday, the Senate Education Committee considered a bill that supporters say will give parents more choice and control in their child's education. SB 3, by committee Chair and Friendswood Senator Larry Taylor, would create two different programs to help parents pay for private school tuition or other education costs. The first program creates education savings accounts, where parents can apply to receive a percentage of the money going to educate their child at a public school and use that to go to an accredited private school. The amount is based on the estimated cost of educating a single student in a public school for one year, about $9700. Families above twice the federal free-and-reduced-lunch program, about $90000, could get 60 percent of that number, families below it could get 70 percent, and families with a child with disabilities could get 90 percent.

The second program would create a scholarship program, funded by donations from private organizations in exchange for tax credits for eligible students. Eligible students are those in foster care, children of service members, or those below twice the federal free-and-reduced-price lunch threshold. These scholarships would cap at three-fourths of the annual cost to educate a student in public schools. If a student stays in public schools, they could receive up to $500 from the program to pay for tutoring, transportation and other supplemental educational expenses.

The Senate will reconvene Wednesday, March 22 at 11 a.m.