(AUSTIN) — Texans seeking a license-to-carry (LTC) permit would see a much smaller fee under a bill considered by the Senate State Affairs Committee on Monday. The current fee of $140 to apply for a license that permits concealed and open carry of handguns in the state is among the highest in the nation, says bill author and Jacksonville Senator Robert Nichols. "These fees impose an undue burden on people's constitutional right to bear arms as it relates to concealed carry or license to carry," he said. "This will take Texas from having one of the highest fees in the nation to one of the lowest in the nation and still covers what I believe to be the real cost of running the program." 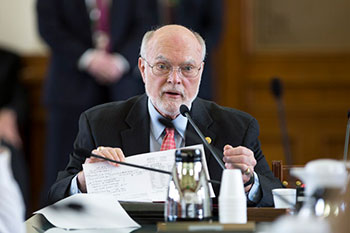 Jacksonville Senator Robert Nichols’ SB 16 would reduce the application fee to get a license to carry a handgun from $140 to $40.

His bill, SB 16, would reduce the application fee to $40 dollars for the initial license, and cuts the renewal fee from $70 every five years to $40 as well. Nichols told members his original bill eliminated all fees for application and renewal, but with state revenue tight this year, he changed it to cover the cost to the Department of Public Safety for managing the program. It costs DPS $27 to conduct a background check on LTC applicants, and there are further incidental costs relating to processing and management which bring the total to about $40 per applicant.

In order to receive an LTC, a person must take a four to six hour class, pass a written test, and then demonstrate adequate proficiency with a handgun at a gun range. The State Affairs Committee considered a few bills that would relax or change some of these requirements for certain people. One, SB 263 by Senator Charles Perry, would remove the minimum caliber requirement for range qualification. Today, people are required to use a handgun of at least .32 caliber to demonstrate proficiency, but supporters argue that for people accustomed to using smaller caliber handguns, this may present difficulty at the range. Another bill by Perry, SB 264, would waive the range requirement for county jailers and state corrections officers, because that they already receive adequate handgun training as part of their profession. Similarly, Plano Senator Van Taylor offered a bill, SB 138, to exempt active and retired military service members from the proficiency demonstration if they have a military range qualification in the last ten years, because they would've already received much more rigorous firearms training in the military.

On the floor Monday, the Senate tentatively approved a bill that would remove the "wrongful birth" cause of action in the state. SB 25 author and Conroe Senator Brandon Creighton describes this as a case where a doctor is sued for delivering a child with a disability. He says the 40 year old law is archaic and sends the wrong message about people with disabilities in Texas. "We should not coin a child born with a disability as an injury, we should not create that negative connotation and a physician should not be liable in any way because a child is simply born disabled, as long as that physician did everything in that standard of care that's accepted," said Creighton.

Opponents of the bill raised concerns that the bill might permit a doctor who opposes abortion to withhold information about congenital anomalies that might make a mother decide to seek an abortion. Creighton disagreed, saying that doctors would still be required under other statutes to meet existing standards of care and disclosure, and provide parents with adequate remedy for malpractice. "If a physician omits critical information that a patient deserves, or directs a patient towards an outcome that is different than what the testing has shown, they are very much on the hook for malpractice, fraud, emotional distress, gross negligence and losing their license," he said.

The Senate will reconvene Tuesday, March 21 at 10 a.m.