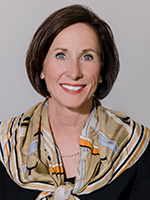 Senator Lois W. Kolkhorst is a fifth generation Texan, with ancestral roots dating back to the Texas War of Independence. Married to her high school sweetheart Jim, she is a dedicated mother and small business owner. Born and raised in Senate District 18, she attended public schools before graduating from Texas Christian University, where she was a four-year letter winner on the Lady Frog golf team.

Growing up in the small town of Brenham, Kolkhorst was taught strong family values and the importance of hard work at an early age. Her father served in the Navy during World War II and afterwards, became a dentist and raised cattle. One of her favorite childhood memories is of her time working cattle and hunting on the family farm, which is still owned by her family today.

Her professional career began in athletic administration at TCU, prior to her and her husband relocating to their hometown of Brenham to start a number of small businesses. Senator Kolkhorst also served as the President and CEO of the Washington County Chamber of Commerce and the Brenham Economic Development Foundation before being elected to the Texas House of Representatives in 2001.

In 2014, after seven successful terms in the Texas House, she was elected to the Texas Senate in a special election, becoming only the 17th female to serve in the Texas Senate since 1845. Encompassing nearly one million constituents, Senate District 18 spans all or parts of 18 counties and includes a portion of the Texas coastline.

As Chair of the Senate Committee on Health and Human Services, Senator Kolkhorst sets public health policies, and oversees physicians and licensed health professionals. Senator Kolkhorst lead the State of Texas through the COVID-19 pandemic and created new initiatives that improve women's health and maternal mortality rates. She has worked with hospitals to see that they provide better care for high-risk pregnant women and newborns, and created an innovative funding method for newborn screenings in Texas. In 2022, the Senator was also appointed to Chair the Special Committee on Child Protective Services to work closely with advocates to protect abused children and reform our foster care system.

Senator Kolkhorst is known for achieving significant public policy changes that impact the lives of every Texan, such as lowering the price cap for insulin, increasing homestead property tax exemptions, and enacting constitutional protections for patient visitation rights during a pandemic. Known by her colleagues for being a hard worker, Kolkhorst has also passed legislation that impacts every code of Texas law, ranging from increased government transparency to fighting human trafficking. A longtime voice for private property rights, Senator Kolkhorst has worked with land owner groups to stop eminent domain abuse. To protect and increase funding for our state parks and historic sites, she authored Proposition 5 in 2019, which passed statewide with overwhelming support. She has also led efforts to enhance Texas roads, ports and trade corridors delivering millions of dollars in funding for the state highways across her district.

As a supporter of the education community, her efforts over the years have earned her both the “Legislator of the Year” by the Texas Association of College Teachers and the “Friend of Education” award from Sam Houston State University College of Education. Recently she championed school finance reforms that resulted in over $11 billion in new student funding, teacher pay raises, and local property tax rate reductions. She also backs efforts to support the Teacher Retirement System.

A recipient of the Legislator of the Year Award from the Sheriffs Association of Texas, Senator Kolkhorst is a vocal supporter for peace officers and first responders. Along with helping to secure over $6 billion for border security, Senator Kolkhorst has worked with local law enforcement to shut down criminal smuggling networks and develop sensible solutions to the mental health crisis that crowds our jails.