"The Eagle Ford Shale is having a tremendous impact on the Texas economy, including by enhancing economic development and spurring investment throughout the region," said Senator Judith Zaffirini, organizer. "What's more, tax revenue generated because of shale development has helped improve the state's financial situation. As the pace of the legislative session continues to accelerate, it is critical that legislators have access to the best data regarding the shale's impact on our state and its communities."

Presenting and answering questions at the briefing were James LeBas, fiscal consultant with the Texas Oil and Gas Association, and Dr. Thomas Tunstall, director of the Institute for Economic Development at The University of Texas at San Antonio.

"It has been 25 years since Texas produced this much oil," Tunstall noted. "By 2021 we expect the shale to yield more than $90 billion in total economic output and support more than 116,000 full-time jobs."

"The incredible turnout at today's meeting indicates just how important the Eagle Ford is, not only to South Texas, but to all of Texas," LeBas said. "Development of the shale formation has been a big success, generating $2.5 billion in direct tax revenue to state and local coffers over the last three years alone. We look forward to a continuation of this great success story."

Legislators who represent counties in the shale founded the EFSLC in 2012, envisioning it as a means for lawmakers to address issues related to oil and gas production in their districts and throughout the state. The caucus will focus on short- and long-term solutions to the impacts of the EFS on transportation, education, public safety, housing, environment and other areas.

"As development in the shale continues, we must work with stakeholders to manage our natural resources responsibly, including not only our oil and gas reserves, but also our air and water," Senator Zaffirini said. "We also must continue to support funding for important transportation projects that enhance commerce and safe travel in Eagle Ford counties."

"All of us who represent the counties in the shale also must continue to promote leveraging our region's extensive higher education resources to promote responsible, sustainable development in the Eagle Ford Shale and to help local communities diversify their economies," Senator Zaffirini said. "For every issue associated with the Eagle Ford Shale, our goal always must be to plan carefully and collaboratively for the future." 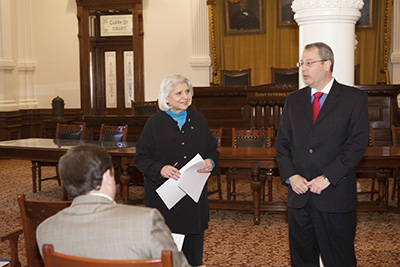 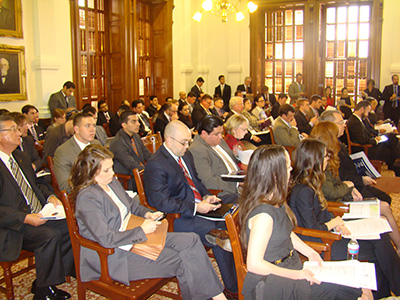 A STANDING-ROOM ONLY CROWD attended a briefing hosted at the Texas Capitol Wednesday by the Eagle Ford Shale Legislative Caucus. Priority issues for the shale region include transportation, education, economic development and the environment.