"I am delighted to join old friends and new constituents in celebrating the rich Mexican-American heritage of Caldwell County and our great state," Senator Zaffirini said.

"Lockhart's heritage and cultural diversity are among its greatest economic assets," the senator said. "Because of its historic architecture, its status as the 'Barbeque Capital of Texas' and festivals like Diez y Seis and the Taste of Lockhart Arts and Cultures, the city attracts visitors from across the state."

A member of the Senate Economic Development Committee, Senator Zaffirini spoke of the potential for bringing more good jobs and development to Caldwell County.

"Thanks to its proximity to the new Formula One racetrack and State Highway 130, Lockhart has the potential to attract new jobs in a variety of industries," she said. "Count on me to champion issues important to Caldwell County in the Texas Senate, including enhancing economic development, expanding educational opportunities and improving state roadways."

Senator Zaffirini, who has passed 725 bills and received more than 670 awards and honors for her legislative, public service and professional work, also encouraged Caldwell County residents to send her their ideas for legislation for the legislative session that convenes on Jan. 8. 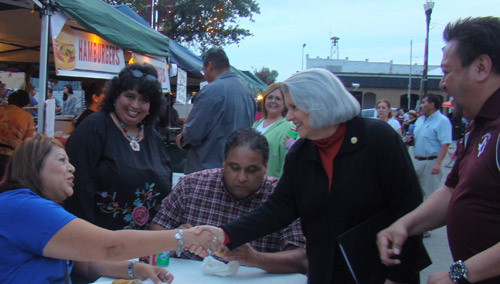 SENATOR JUDITH ZAFFIRINI, D-LAREDO, greets Lockhart residents at the city's annual Diez y Seis celebration. A champion for the communities in her district, Senator Zaffirini is Chair of the Senate Higher Education Committee and is a member of the Legislative Budget Board and the Senate Finance, Economic Development, Health and Human Services and Redistricting committees.