(AUSTIN) — Senator Judith Zaffirini, D-Laredo, on Thursday (Feb. 16) received the Horizon Award from the Christian Life Commission, the policy agency of the Baptist General Convention of Texas, for her leadership in promoting access, affordability and excellence in higher education.

"As Chair of the Senate Higher Education Committee, I am delighted to accept this award and to champion higher education opportunities for all," Zaffirini said. "It's my pleasure to share Texas Baptists' goals of increasing high school graduation rates and ensuring that Texas students are college ready."

Senator Zaffirini accepted the award at the organization's Hispanic Leadership and Advocacy Day, at which the leaders of a group of 1,200 Hispanic Baptist Churches in Texas discussed policy issues of particular importance to Hispanic Texans.

"We are honored to present Senator Zaffirini with the Horizon Award for her dedication to higher education in Texas," said Suzii Paynter, the director of the Christian Life Commission. "Because of her efforts, including authoring bills that support the TEXAS Grant program and a single statewide financial aid deadline for Texas' public four-year universities, deserving Texas students are able to excel in education."

"Hispanics are the fastest-growing population group in our state," Senator Zaffirini said. "By 2040, the number of Hispanic children enrolled in Texas public schools is expected to grow by more than 200 percent. Accordingly, the future of our state will depend increasingly on the success of its Hispanic students."

More information about Senator Zaffirini's education legislation can be obtained via her website, www.zaffirini.senate.state.tx.us. 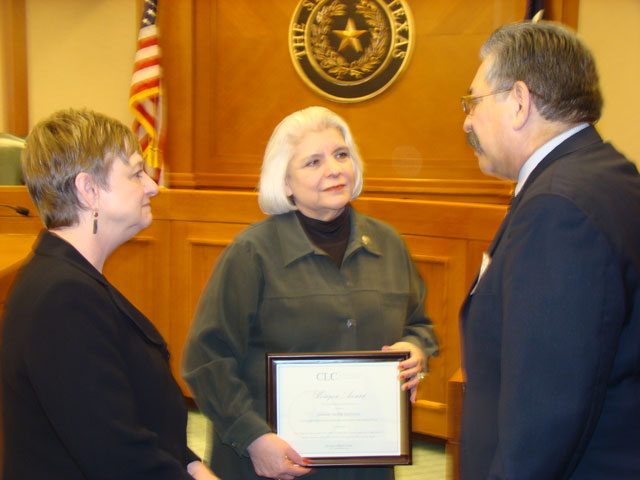 SENATOR JUDITH ZAFFIRINI, D-Laredo, (ABOVE) accepts the Horizon Award from Suzii Paynter, director of the Christian Life Commission, and Gus Reyes, PhD, director of the Texas Baptist Hispanic Education Initiative. Chair of the Senate Higher Education Committee, Senator Zaffirini (BELOW) welcomes Hispanic Baptist leaders from across Texas to the Capitol.