"Because of the significant budget shortfall, the 82nd Texas Legislative Session was exceedingly challenging," Senator Zaffirini said. "Despite this and other hurdles, we persevered in making a difference for the families of Senate District 21 and of our great state."

Enhancing financial aid programs for Texas families is one of Senator Zaffini's top priorities in the Texas Senate. Her Senate Bill (SB) 28, sponsored by Rep. Dan Branch, R-Dallas, reforms the TEXAS Grant program, which has helped thousands of Texas families afford to send their children to college. The bill will prioritize grants for high-achieving, low-income students.

With its multitude of deadlines, the financial aid process can be confusing for families sending a first child to college. SB 851, also by Zaffirini and Branch, creates a single statewide financial aid deadline for all public four-year universities in Texas.

Accountability also is the focus of Senator Zaffirini's SB 38, which was passed after being attached to SB 1534 by Senator Florence Shapiro, R-Plano. The bill brings for-profit and career colleges into the state's higher education accountability system.

A member of the Health and Human Services Committee since 1987, Senator Zaffirini always has championed quality care and respectful treatment for persons with disabilities. Her SB 37, sponsored by Rep. Elliott Naishtat, D-Austin, authorizes the statutory continuation of the Promoting Independence Advisory Committee. The committee plays a key role in helping Texans with disabilities live in the community or with their families, instead of in costly institutional settings.

SB 41 by Zaffirini and Rep. John Davis, R-Houston, prohibits the use of prone holds, straitjackets and other dangerous, ineffective restraints in State-Supported Living Centers. The hurtful slur "retarded" is eliminated from state statutes by HB 1481 by Rep. Vicki Truitt, R-Keller, and Zaffirini. The bill requires state agencies to use respectful language when referencing persons with disabilities.

A longtime champion of early childhood education, Senator Zaffirini continued her legislative efforts to ensure wider access to quality childcare. Her SB 264, sponsored by Rep. Guillen, will ensure that parents are informed consumers by requiring local workforce boards to provide them with information about quality child care indicators for each child care provider in the area. Childcare employee training is enhanced by SB 265 by Zaffirini and Rep. Stefani Carter, R-Dallas.

Senator Zaffirini believes that reading fosters a lifelong love of learning for children of all ages. Accordingly, HB 2139 by Rep. Guillen and Zaffirini would establish an Adopt-A-Library program to encourage public and private entities to invest in public libraries throughout Texas.

Public safety is consistently ranked among the top concerns of Texans. Senator Zaffirini's SB 250 will help more victims of stalking obtain life-saving protective orders. She passed her SB 46 as an amendment to HB 242 by Rep. Tom Craddick, R-Midland, prohibiting texting-while-driving on Texas roadways. What's more, HB 2138 by Rep. Guillen and Zaffirini will enhance the cooperative efforts between game wardens and state military forces in water-related rescues.

This Memorial Day Senator Zaffirini is especially proud to have worked with local veterans groups to rename portions of State Highways 359, 16 and 285 as the Veterans of the Korean War Memorial Highway. The bill was sponsored in the House of Representatives by Rep. Richard Raymond, D-Laredo.

Improving government efficiency and eliminating unnecessary spending is another priority addressed by Senator Zaffirini's legislation. HB 326 by Rep. Guillen and Zaffirini requires agencies and departments under sunset review to submit to the legislature the unnecessary and duplicative reports that can be eliminated to save on costs.

"I am grateful for Lt. Governor David Dewhurst's leadership and for the opportunity to work closely not only with my colleagues in the Senate and the House, but also with local leaders, educators and community and health advocates to develop and pass legislation benefitting SD 21 and our great State of Texas."

At the beginning of the legislative session Lt. Gov. Dewhurst re-appointed Senator Zaffirini Chair of the Senate Higher Education Committee and a member of the Senate Finance, Redistricting, Administration and Economic Development Committees. Later in the session, he appointed her Co-Chair, with Rep. Branch, of the Joint Oversight Committee on Higher Education Governance, Excellence and Transparency. She also serves on the Legislative Budget Board.

The bills passed by Senator Zaffirini have been sent to Governor Rick Perry for his consideration. The progress of these and other bills can be monitored via the internet at www.zaffirini.senate.state.tx.us or by contacting the Texas Legislative Reference Library at 512/463-1252.

ATTACHMENT:   A list of bills passed by Senator Zaffirini during the 82nd Legislature, Regular Session 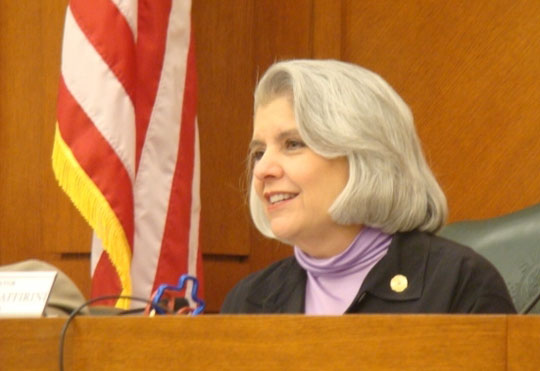 SENATOR JUDITH ZAFFIRINI, D-Laredo, represents the 21st Senatorial District of Texas (SD 21). She is Chair of the Senate Higher Education Committee and Co-Chair of the Joint Oversight Committee on Higher Education Governance, Excellence and Transparency. She also is a member of the Senate Finance, Administration, Economic Development, Redistricting and Health and Human Services committees. Senator Zaffirini champions legislation and funding that improve the lives of SD 21 families.