Senate Bill (SB) 58 by Senator Judith Zaffirini, D-Laredo, would designate segments of State Highways 359, 16 and 285 as the Veterans of the Korean War Memorial Highway.

The highway would extend from Laredo to Falfurrias and would traverse Webb, Jim Hogg, Duval and Brooks counties.

"More than 289,000 Texans served in the Korean War, and 1,723 of them were either killed or missing in action," Senator Zaffirini said. "Many of them were from South Texas, and naming an important South Texas route in their honor is a fitting tribute to their patriotism and sacrifice."

The Texas Memorial Highway System is a network of roads named in honor of noteworthy Texans, including the distinguished veterans of many conflicts.

Groups including the Webb County Korean War Veterans Association and Texas Veterans of Foreign Wars are working hard to secure support for this important legislation. Grants or donations would cover the cost of erecting memorial markers and signs along the highway.

"Designating a memorial highway honoring Korean War Veterans in South Texas is supported strongly," Senator Zaffirini said. "This region is home to many of these brave men and women, and I am proud to collaborate in this effort with my friend, Mary Freeman, and Webb County Korean War veterans, including Ernesto Sanchez, who initiated this project."

SB 58 was sent to the House of Representatives for consideration. The continued progress of this and all bills authored by Senator Zaffirini can be monitored via the internet at www.legis.state.tx.us or by contacting the Texas Legislative Reference Library's toll free in-state hotline, 1-877-824-7038. 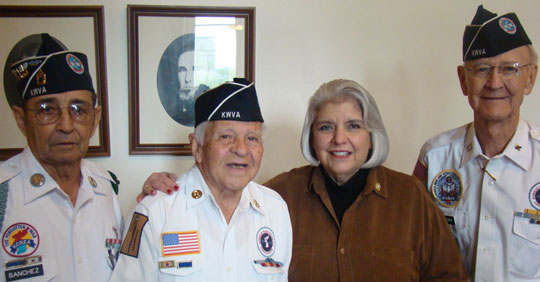