Senate Bill (SB) 9 by Senator Judith Zaffirini, chair of the Senate Higher Education Committee, is a priority of Lieutenant Governor David Dewhurst and is co-sponsored by 22 senators. It would provide a path for Texas universities to compete for elite, or "tier one" status, by providing matching funds for eligible universities that reach certain goals in research funding and private donations.

Creating additional national research universities in Texas would enable institutions to bring together a critical mass of talent that would enrich academia and the state. By not having more elite institutions, Texas loses out in research funding and venture capital, top students who choose out-of-state institutions and in attracting top faculty, researchers and scientists.

"I am delighted that the lieutenant governor and all senators voted to pursue excellence in higher education in Texas," Senator Zaffirini said. "The bill would authorize mission-specific matching incentive funding to increase the prestige of Texas' two national research universities, namely, The University of Texas at Austin and Texas A&M, and of seven emerging research universities, namely, Texas Tech University, University of Houston, University of North Texas, UT-Arlington, UT-Dallas, UT-El Paso and UT-San Antonio.

"The result would enhance Texas' national and international profile in the academic arena and, ultimately, in the competitive business domain as well."

SB 9 also would create the Texas Centers of Excellence Performance Fund to promote strong undergraduate curricula and focused research centers of excellence. It would authorize matching funds to the other 26 Texas universities, based on degrees awarded, number of National Merit Scholars and number of students who graduated in the top 10 percent of their high school class.

"Our bill is the result of our higher education committee's work during the interim, based on a charge from Lieutenant Governor Dewhurst," Senator Zaffirini said. "It also reflects the collaboration of the chancellors and presidents who administer the impacted universities. Only by reaching consensus among them and their respective senators could we pass SB 9 unanimously."

The Lieutenant Governor assigned the bill one of his priority numbers, signaling his support to legislators.

SB 9 was sent to the House of Representatives for consideration. The continued progress of this and all bills authored by Senator Zaffirini can be monitored via the internet at www.legis.state.tx.us or by contacting the Texas Legislative Reference Library's toll free in-state hotline, 1-877-824-7038. 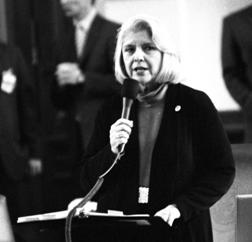