(AUSTIN) -- The Texas Senate today (Thursday) unanimously passed Senate Bill 64 by Senator Judith Zaffirini, D-Laredo, which requires general-purpose political committees (PACs) to disclose contributions of more than $5,000 during the last nine days of a campaign. This disclosure is required of candidates and their campaign committees for contributions of $1,000.

The bill closes a legal loophole that allows large contributions to general-purpose PACs to go unreported for months after a general or primary election.

"We must ensure the integrity of the electoral process, which is why I filed SB 64," Senator Zaffirini said. "All PACs should be held to the same standards as candidates and campaign committees. This bill provides this essential level of parity."

Under current law the Texas Ethics Commission (TEC) is not authorized to issue penalties automatically for PACs that fail to file timely special reports near an election. SB 64 also will authorize the TEC to notify and issue automatic penalties for campaign committees that fail to submit those reports timely. 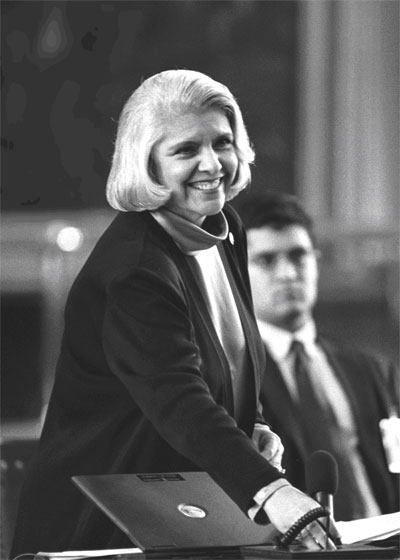 SENATOR JUDITH ZAFFIRINI, D-LAREDO, prepares to lay out SB 64, which requires general-purpose political committees to disclose contributions of more than $5,000 during the last nine days of a campaign.