(AUSTIN) -- A delegation of Laredo elected and civic leaders visited the Capitol on Tuesday (March 8) to celebrate Laredo's 250th anniversary and speak with legislators. Senator Judith Zaffirini, D-Laredo, hosted them in the Texas Senate and honored them with the passage of SR 324.

"The rich history and values of Laredo reflect the heritage and accomplishments of our great state," Senator Zaffirini said.

"This year we are celebrating our 250th anniversary and our status as the only city in Texas that has operated under seven flags," Senator Zaffirini said. "We are a biliterate, bilingual and bicultural community, and proud of it."

An evening reception celebrated Laredo Legislative Day and recognized legislators. Many of the Laredo delegates who visited the Capitol were scheduled to advocate for local issues on Wednesday. 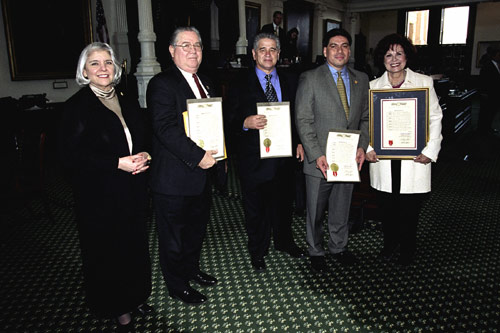