(AUSTIN) -- Lieutenant Governor David Dewhurst on Thursday (Jan. 27) re-appointed Senator Judith Zaffirini, D-Laredo, to serve as vice chair of the powerful Senate Finance Committee and as a member of the Senate's Education, Health and Human Services, and International Relations and Trade committees. He also newly appointed her to the Subcommittee on Higher Education.

As vice chair of the Senate Finance Committee last session, Senator Zaffirini was instrumental in drafting a balanced budget while championing education and health and human services. She was one of five senators on the Appropriations Conference Committee that wrote the state's final appropriations bill and one of four on the Legislative Budget Board that, with the governor, has budget execution authority during the interim.

The vice chair of finance is a coveted position because that senator traditionally serves on both the Appropriations Conference Committee and on the Legislative Budget Board.

The veteran legislator is credited widely for minimizing cuts not only to safety net programs for low-income Texans, particularly children and the elderly, pregnant women and persons with disabilities, but also for instructional facilities, higher education and health science centers.

"I am delighted that Lieutenant Governor Dewhurst again named me to key leadership positions from which I can continue to make a difference," said Senator Zaffirini, the fourth-highest ranking senator and the highest-ranking senator for Bexar County and the border region.

As the former chair of the Senate Health and Humans Services Committee, Senator Zaffirini will continue to serve on the committee of which she has been a member since 1987.

"Higher education has always been one of my greatest passions," Senator Zaffirini said. "I look forward to addressing higher education concerns in addition to the many other important issues before the legislature."

The Texas Senate will operate during the session at hand with 15 committees and four subcommittees chaired by 11 Republicans and eight Democrats.

"My assignments reflect the areas that are most important for the families of Senate District 21," Senator Zaffirini said. "Each committee reflects a wonderful combination of veterans and freshmen, Democrats and Republicans. This dynamic will make for an exciting exchange of ideas. I am confident that the 79th legislative session will be one of the most productive for Texas." 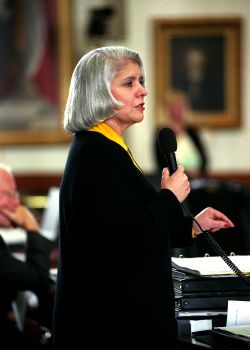